Runners Connect » » Injury Prevention Are You More or Less Prone to Injuries with Maximalist Shoes?

Are You More or Less Prone to Injuries with Maximalist Shoes?

That is what the New York Times declared a few weeks ago with regards to running shoes.

In this case, the “old” is minimalist shoes, and the “new” is their newly-christened opposite, maximalist shoes.

This term might have been more appropriate for the very cushioned, very heavy shoes that graced running store displays in the early 2000s, since new “maximalist” offerings from brands like Hoka One One and Altra lack many of the features (or design flaws, depending on your perspective) of older built-up running shoes.

Gone are the pronation-control devices and gels, air sacs, or fluids under the heel. Instead, the main selling point of these shoes is the thick layer of foam underfoot, which provides an inch or more of cushioning between your foot and the ground, and their relatively light weight for their size, thanks to high-tech lightweight foam. 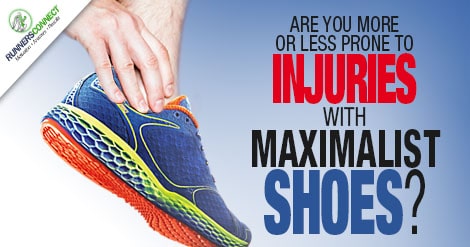 Is there any real evidence?

What’s the scientific research say about these ultra-cushioned shoes? Are they any better or worse than a “regular” shoe?

Unlike the makers of minimalist shoes a few years ago, these maximalist shoe companies haven’t funded any scientific studies or cited any that they claim support their ability to prevent injuries, so we’ll have to look at more general research on shoe cushioning.

This decision, by the way, is probably a rational business decision, not an overt attempt to mislead—the last two trendy shoe styles which did fund research and cite scientific studies (Masai Barefoot Technology and Vibram Fivefingers) got slammed with class-action lawsuits over false advertising claims.

The strange conclusion, as Deadspin‘s Kyle Wagner observed, is that “research is bad” because it exposes you to testable claims that can be challenged.

How do maximalist shoes alter your impact?

A reasonable person might assume that more cushioning underfoot would mean less impact when you hit the ground. But, as many readers probably know, that isn’t the case.

Regardless of the surface or what kind of shoe you’re wearing (if any), you actually hit the ground with the same force.1

If you’re running along at eight-minute mile pace, your impact force, and the active force, which occurs when you push off the ground, are the same no matter the surface or shoe.

This is because your body isn’t a passive weight that falls to the ground. Your nervous system actively monitors your mechanics, and adjusts the tension of your muscles just before you hit the ground.

If you put your hand on you quad, you can feel the muscle tense up right before you hit the ground, prepping your legs to absorb the impact.

When you run on a hard surface, your muscles are not quite as tense as when you run on a soft surface, or with a cushioned shoe. As a result, if you considered the “spring system” of the ground, your shoe, and your leg, its stiffness would always be the same, because of how your muscles dynamically adjust to the surface you run on.2

A maximalist shoe won’t result in less impact, but this doesn’t mean lots of cushioning will have no effect at all.

A 2010 study comparing running on pavement to running on grass found that softer surfaces lead to lower localized pressure on the bottom of your foot.3

You can envision this fairly easily: just like sitting on a hard wooden bench puts more pressure on a smaller area of your pelvis, so too does a very firm shoe or hard surface put more pressure on your feet. Of course, the overall sum of forces isn’t any higher, but lots of cushioning might help spread it out.

This could be good news if you’ve had issues with metatarsalgia or perhaps metatarsal stress fractures—a 2013 study on runners transitioning to minimalist shoes showed an increase in bone stress injury, as measured by MRI, when compared to runners using traditional shoes, so perhaps the opposite is true as well.4

However, generous cushioning in a running shoe does raise a few theoretical concerns.

A 2007 study by Clare Milner, Joseph Hamill, and Irene Davis demonstrated that runners with a history of tibial stress fractures have higher leg stiffness at the knee joint when they run.5 The authors hypothesized that their higher leg stiffness transferred more of the shock from impact onto the “hard” structures of the leg, namely the bones.

Recall that running on an ultra-soft surface requires very high leg stiffness: it’s probable that running in a maximalist shoe will shift some stress away from your foot and away from the soft tissues of your leg (i.e. the muscles and tendons) and put it onto your bones, just by virtue of the changes in leg stiffness necessary to run normally.

Whether this change is at all significant is very much an unanswered question. If you have a history of tibial stress fractures or shin splints, you might want to be extra careful if you decide to try a maximalist shoe.

If you want to run one mile in, say, ten minutes, it takes a certain amount of mechanical force to do it. No shoe, or lack thereof, can fundamentally change this.

Scientific research appears to show that shoes can shift around where some of this energy goes, though. Maximalist shoes could shift the balance towards less stress on your muscles and tendons, and they will also likely reduce localized pressure on the bottom of your foot. But, as was the case with the last fad, they aren’t going to be a miracle cure for everything.

Some people groan about the hype and the marketing cycle that drives these fads, but at the end of the day it’s a good thing for runners.

Thanks to the previous minimalist trend (which will always exist at least as a niche market) and the rising maximalist trend, there’s never been a wider variety of shoes available to run in.

Since the only scientifically-approved advice for choosing footwear is “pick whatever is most comfortable for you,” I welcome the new direction in shoe design!

Did you listen to our podcast with Hoka One President Jim Van Dine?

4 Responses on “Are You More or Less Prone to Injuries with Maximalist Shoes?”