Do Tight Shoes Increase Your Risk of Developing Bunions? 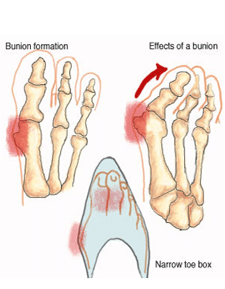 A big concern for runners as they get older is the integrity of their lower body.  Without a strong pair of legs and feet that are in good condition, it can get very hard to continue the sport you love.

Though there is a lot that can go wrong and interfere with your running as you get older, today we’ll be looking at just one condition in particular: bunions.

What is a bunion?

A bunion is a foot deformity where your big toe slants outward horizontally, pushing the tip of the big toe up against your little toes, and creating a characteristic sharp angle along the inside of your foot, at what’s called the first metatarsophalangeal joint—where your big toe connects to your foot.  The reason for the deformity is an abnormal growth of bone, so it is not a condition that will correct itself naturally.

Though bunions, or hallux valgus, as they are known in the medical community, are well-known among the general population for causing pain and discomfort, they can have a big impact on your running as well.  Women’s marathon world record holder Paula Radcliffe, for example, lost several months of running because of a bunion on her foot.

Popular wisdom holds that bunions are caused by wearing shoes that are too tight, forcing the big toe outwards and causing the deformity to develop.  Today, we’ll look to the scientific literature to see if runners need to worry about their footwear causing bunions.

Does shoe design and size matter?

Whenever there is a hypothesis that “shoe usage causes X,” it can be very difficult to test in modern societies, since nearly everyone has worn shoes for a large proportion of his or her life.  So, most of the important studies on how shoe usage affects foot health come from developing countries, where some portion of the population (usually the wealthier part) regularly uses footwear, while the rest do not.  As we’ll soon see, these studies, while helpful, can also have their own flaws.

The first paper we will look at is a large study done between 1960 and 1962 on St. Helena, a small island of 4,600 people at the time, located in the South Atlantic Ocean, about halfway between South America and Africa.

I.B. Shine, the author of the paper, worked there as a medical officer and conducted an investigation of the incidence of hallux valgus among his patients.  Shine limited his study to the 4,000 inhabitants over the age of five, all of which he was able to see for treatment or regular checkups during his tenure as medical officer.

The residents of St. Helena were the descendents of European settlers, Chinese laborers, and African slaves, and given the isolation of the island, low income levels, and its exceptionally small population, shoes were fairly uncommon.  Some 54% of the population went barefoot most of the time, reserving one pair of shoes for church, holidays, and other occasions.

Using a protractor-like device, Shine was able to measure the angle of deviation of the big toe on his patients, then asked them about their shoe-wearing habits. As an informal “honesty check,” Shine checked the conditions of the soles of their feet—people who were habitually barefoot would have visibly thicker calluses.

Using the information he collected, as well as data on the age, sex, and occupation of the patients, Shine identified a strong correlation between years of shoe usage and the incidence of hallux valgus—defined by I.B. Shine as a deviation of more than 10 degrees of the big toe.

Among the citizens of St. Helena who never wore shoes, bunions did occur, albeit rarely (only about 2% of the unshod population).

The incidence of bunions rose linearly with every year of wearing shoes, with the rate of increase being greater among women—nearly 50% in women who had worn shoes for at least 60 years of their life.

Shine noted that, because shoe styles were quite limited on St. Helena, women did not tend to wear shoes that were substantially different than the shoes that men wore. Because of this, Shine suggests that the reason women suffer bunions more than men may not be entirely due to more restrictive shoe design.

The impact of closed-toed footwear

Another population study comes from Japan, where two doctors, Tadashi Kato and Showri Watanabe, published a 1980 paper on the changing nature of footwear in Japan and the rise of patients with bunions at their clinic.

Prior to the 1970s, Kato and Watanabe report that leather shoes were uncommon in Japan; the predominant shoe type was the geta, an open-toed wooden sandal.  Citing a lack of descriptions or depictions of bunions in ancient times, Kato and Showri suggest that restrictive, closed-toed footwear is related to increased risk for developing bunions, accounting for the increase in patients with bunions at their clinic.

Kato and Watanabe’s study has its limitations— most prominently, it’s very hard to separate the link between wealth, shoe-wearing habits, and tendency to seek out medical professionals for problems.

Like with other studies on foot conditions in developing worlds, the rising middle class—those with the disposable income to spend on western-style shoes—are also those with the money and means to see a doctor or podiatrist.

So it may just be that the shod population is more likely to seek out medical care for their bunion pain.

I.B. Shine’s study refutes this to some extent; because of his unique ability to examine and evaluate all  4,000 of the island’s population over six years of age, his study was able to dodge a large part of this problem.

While we have seen some good evidence that shoe use is related to increased risk of developing bunions—especially in women—the direct connection between particular types of footwear and bunions is less clear.

Shine claims that most of the shoes worn by the inhabitants of St. Helena were poorly fitted, due to the lack of sizes and styles available on the island, but the link between tight-fitting shoes and hallux valgus is still not clear-cut. Unfortunately, it will be hard to determine such a link in the future, given that unshod populations are relatively rare today. However, still keep these in mind: