Hip strength and running form: The role of hip drop in running injuries

A lot of readers have been asking for articles on biomechanics and running form, and as this is an area of intense interest for me, I’m eager to do more writing on that front.  But, because even basic questions of the “what is good form?” sort straddle the boundaries between scientific knowns and unknowns, my articles will necessarily take less of a “hard science” tack.  Now, we aren’t tossing everything out and starting anew, but working on this front is going to require a bit more predicting and inferring than we’ve had to do in the past.  That being said, I’m eager to jump right in.

Forward and back versus side-to-side movements in runners

When most people picture a runner with “good form,” a very specific type of image usually springs to mind: a young, lean runner gracefully floating along.  Our mind’s “camera” inevitably shows a lateral view, which highlights a very peculiar kind of bias in how we think about running form: that it is primarily related to motion in what biomechanics researchers call the “sagittal” plane (essentially, forwards and backwards).

But much of what’s being revealed in high-tech biomechanics laboratories around the world has less to do with forward-backward motions like body lean and leg extension and more to do with side-to-side  motions, particularly in the hip and knee.  That’s where we turn our attention today.

Importance of side-to-side stabilization for runners

As one of my articles several weeks ago pointed out, many runners who suffer injuries have weak hip stabilizing muscles.1  Among these muscles, the ones which are most often weakened in injured runners are the abductors and external rotators.  Aptly, they abduct and externally rotate the hip.

Interestingly, and perhaps not surprisingly, research by Irene Davis at the University of Delaware has shown that one good predictor of future injuries in healthy runners is a mechanical evaluation of hip mechanics: runners who have excessive hip adduction (opposite of abduction) and internal rotation are at an increased risk of developing injuries in the knee and IT band.2

The logic is pretty simple, then: weak abductor and external rotator muscles cause excessive adduction and internal rotation during running, since the hip muscles aren’t strong enough to resist the forces from ground impact.

Unfortunately for us, however, the relationship between muscle strength and muscle function isn’t perfect.  Other findings indicate that the link between muscle weaknesses causing injury is weaker than we’d expect, because another factor plays a role: neural function.3

Essentially, this is the way in which you “choose” to run.  I put “choose” in quotation marks because it isn’t usually a conscious choice, but rather it’s a repetition of neural patterns that are strongly engrained in your brain.  You don’t have to think “move left leg, move right leg” when you run; it just happens.  Of course, if we could peer into the brain’s raw instructions, it’d be a bit more complicated than “left, right, left.”  It’d be something more along the lines of “fire iliopsoas at 40% strength, fire rectus femoris & gluteus medius at 70% strength” and so on.

In other words, it may be possible that your muscles are strong enough but just aren’t firing in a way that would prevent excessive adduction and internal rotation.

Davis’ lab at U Delaware has a high-tech treadmill that allows runners to see their hip adduction in real-time so they can learn what it feels like to run with a “proper” stride (or at least one which should reduce the risk of knee injury).4  This technology is very new and very expensive, so it’s not something most runners will be able to use in the near future.  And it’s very tough to evaluate hip adduction on your own.  But nevertheless, in my own experience, I’ve found that it’s productive to look for one of the other consequences of improperly firing hip abductors: hip drop.

What I’ve labeled “hip drop” is more properly called “Trendelenburg gait,” not exactly a quick phrase you could shout at a high-schooler with deteriorating form in a cross country race.

Remember, during the “stance” phase of the stride, the body is supported by only one leg.  So, when your right leg is planted, it means your entire left side is “cantilevered” over your left hip.  If the right hip muscles aren’t firing correctly (either because of weakness or just bad neural patterns), the pelvis and upper body will tilt downwards on the left side. 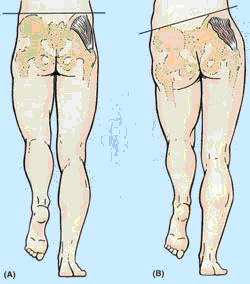 This is commonly demonstrated with illustrations (above), but is also fairly easily spotted in real runners too.  The problem is usually exacerbated during races and long workouts, probably because your body as a whole is getting tired.

You don’t need a high-tech treadmill to spot hip drop.  All you need is a friend you run with, or a treadmill plus a mirror or video camera.  If you see excessive hip drop, see if you can consciously change it by focusing on “standing tall” and keeping your pelvis level.  If you’re having trouble doing that, it probably means you’ve got weak hip abductors and external rotators.  You can address that with some side leg lifts and “clamshell” exercises.

Download a video and PDF version of the 5 most effective hip exercises for runners. You’ll get more images, full descriptions on how to perform and a video to help guide you.

Putting it all together

Hopefully this has been an informative, brief introduction to one aspect of “good running form” that’s fairly noncontroversial and easy to spot without high-tech equipment.

Hip drop is pretty common among runners (as is hip muscle weakness), so use a mirror, camera, or a friend to evaluate yourself to see if your hips tilt when you’re in the stance phase of your stride, particularly if you have had knee or IT band issues in the past. 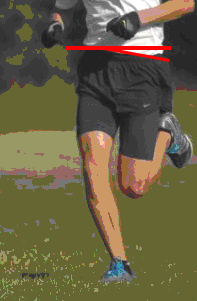 The runner pictured above, a teammate of mine in college, had IT band issues more than once during his college career, and fixed them only though rigorous strength work.

Now, we can’t yet say that the cause of his problems (or yours) was due to the abductors and external rotators, but a growing body of evidence and experience is pointing in that direction, and while hip drop may not be the best indicator of weak or dysfunctional abductors, it’s fairly accessible to all runners and eliminating it does not seem to have any real drawbacks either.

If you do find that your hips are dropping, you can fix it either by overriding your “natural” gait habits or by doing running-specific strength exercises to shore up your weaknesses.  Fortunately, after practicing standing tall and keeping your pelvis level for a while, it will become automatic, overriding the old stride pattern in your brain.

Hopefully you’ve enjoyed this first foray into the sometimes-nebulous universe of what constitutes “good” running form, and I look forward to reading your comments and questions.

10 Responses on “Hip strength and running form: The role of hip drop in running injuries”