Ibuprofen works wonders on a headache. That pounding pain is gone within a matter of minutes.

So surely taking ibuprofen before running will help reduce the pain?

Unfortunately, it does not work like that, and you may actually be doing long term damage to your kidneys by taking ibuprofen before running a marathon. 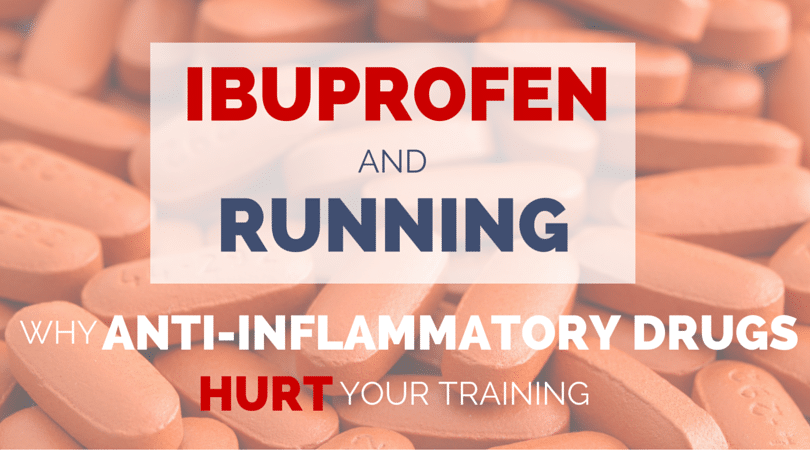 You too have probably come across your fair share of injuries or tough workouts that made your legs feel like jello.

Like many runners before you, when faced with a slight twinge, inflamed tendons, or delayed muscle soreness from training, you may have popped a few over the counter non-steroidal anti-inflammatory drugs (NSAIDs for short, such as ibuprofen and Advil).

I’m ashamed to admit it, but I spent the majority of my freshmen year in college taking enough ibuprofen to make the local CVS wonder if the science department was conducting an experiment on the effectiveness of Ibuprofen to subdue elephants!

While I, along with many other athletes, thought we were being tough and helping our training by reducing inflammation with Ibuprofen and Advil, recent research and analysis has shown that anti-inflammatory drugs can actually limit or cancel out the very training benefits we’re so desperate to achieve.

That notion flies in the face of everything you thought about the benefits of anti-inflammatory drugs, right?

It’s not easy to do a 180 on what we thought was beneficial, so let’s take a look at the role of inflammation, when you should take ibuprofen before running, and how you can take steps to maximize your training and recovery.

Why Does Ibuprofen Not Help if it Reduces Inflammation?

The word inflammation gets a bad rap with athletes of all sports.

Say the word inflammation and fellow runners will immediately give you a sympathetic pat on the back.

Inflammation is a protective attempt by your body to remove harmful stimuli and to initiate the healing process.

Without getting too scientific, after a hard workout or during the early stages of an injury, the body activates specific cells that attack the injured area by increasing blood flow, producing swelling, and stimulating the nerves that cause pain.

Inflammation is actually the beginning of the healing process and is critical to healing injuries and recovering from normal training bouts.

What’s the bottom line?
While inflammation is the culprit behind pain and swelling, without it, the recover process would be much slower.

How are Anti-Inflammatory Drugs Going to Hurt My Training?

Now we now know that inflammation is actually an important step in the healing process, we can begin to appreciate how taking anti-inflammatory medications after hard workouts may inhibit training adaptations.

Think about it this way:

When you run, you actually create small micro-tears in the muscles with every step you take.

The faster or harder you run, the more forcefully you contract the muscles and the more damage you incur.

These micro-tears stimulate an inflammatory response, signaling the body to deliver resources such as blood, oxygen, and nutrients to begin the healing process.

By taking anti-inflammatory drugs, you prevent the inflammation process from initiating the healing process.

Not exactly ideal for runners, especially when in the middle of a marathon training schedule.

Here’s where it gets really interesting:

Recently, numerous studies have confirmed this new theory on the harmful effects of anti-inflammatory drugs.

One study on the effects of Ibuprofen on skeletal muscle showed that taking ibuprofen during endurance training canceled running-distance-dependent adaptations in skeletal muscle.

Another study confirmed in the laboratory that the use of NSAIDs after exercise slowed the healing of muscles, tissues, ligaments and bones.

The research is clear. Taking anti-inflammatory drugs such as Advil and ibuprofen after a workout will result in slower recovery times.

Why is Taking Ibuprofen Before Running a Race Bad?

Another common reason runners use ibuprofen or Advil is to take the edge off the pain of racing or to help prevent a previous injury from bothering them during a race.

If you thought you were the only one who has made this mistake, think again.

You are not going to believe this:

In 2008, a study of Ironman competitors showed that 50% of racers used NSAIDs immediately prior to or during the race!

Unfortunately, the idea that NSAIDs will help take the edge of the pain of racing or prevent an injury from getting worse doesn’t hold up to science.

Studies conducted on runners at the Western States 100 miler found that there was no perceived or actual difference between the runners using ibuprofen during the race and those who weren’t.

Finally, the use of NSAIDs to mask pain from an injury may allow you to continue training in the short-term, but will ultimately lead to a more serious and longer lasting injury down the road.

I don’t think science is needed to confirm that running while injured isn’t a great idea.

Unfortunately, it’s all to easy to mask the natural pain receptors of the brain to trick ourselves into thinking we can still train.

When Should I Take Ibuprofen Before Running?

The question then becomes, when is it appropriate for a runner to take anti-inflammatory medication?

Like most real-life situations, too much of any one thing isn’t good.

During the initial stage of an acute injury (such as a muscle strain, sudden bout of tendonitis, or an ankle sprain) NSAIDs can actually facilitate healing.

The exact reason for the difference in healing properties between “normal” inflammation and excess inflammation or not clearly understood by scientist.

However, research does show that during the first 2-3 days of an acute injury, NSAIDs can help heal injuries.

What does this mean?

If you have a sudden, acute running injury, taking ibuprofen or Advil in the first 2-3 days is advised. After that 2-3 day window, you should let your bodies own natural healing mechanisms take over.

The next time you’re about to pop the cap on a bottle of Advil before a race or after a tough workout, or you’re thinking about taking a few Ibuprofen to help heal your nagging IT band, think again.

Not only is there no benefit to NSAIDs in those situations, but it could actually be hindering your recovery and performance.

Download our full list, with the top 10 foods for each of the essential recovery vitamins, minerals and macro nutrients. Plus a sample 1-day meal plan to get your body back on track with healing.

83 Responses on “Ibuprofen and Running: Anti-Inflammatory Drugs Hurt Your Training”