Even though it is not talked about very often in running communities,  a “stiff big toe” (or as it’s often referred to, ‘hallux limitus’) can actually be a very common source of pain in the ankle, knee, hip or lower back. 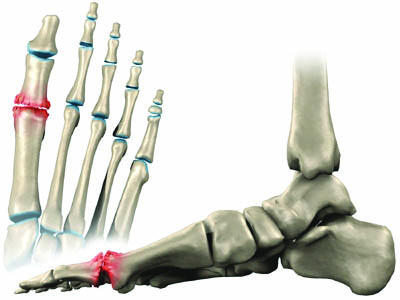 Imagine you are running, and one of your feet is about to touch the ground in front of you. The foot is pulled back slightly (dorsiflexed) in preparation for initial contact. The big toe (hallux) is probably also dorsiflexed but as your foot is still off the ground this is not significant.

However, once your foot touches the ground and starts to support your body weight, the degree of dorsiflexion that the big toe joint is able to go through becomes important.

As your body passes over the supporting foot, there comes a point called mid stance, when the hip, knee and ankle stop flexing (bending) and begin to extend (straighten). The technical term for the ankle when it extends (i.e. the foot points downwards instead of pulling back) is plantarflexion (annoying, I know).

This movement permits the degree of big toe dorsiflexion required for stabilizing of the foot (via the windlass mechanism) during propulsive loading.

If slide & climb movement within the MTP (metatarsophalangeal) joint becomes restricted, the big toe will not be able to dorsiflex sufficiently, causing alternative foot mechanics to be sought, which in the long term could lead to discomfort and possible degenerative arthritis.

The presence of limited movement in the MTP joint (as opposed to no movement at all) is referred to as hallux limitus. It is important to differentiate two distinct sources of this limited movement: functional vs. structural. 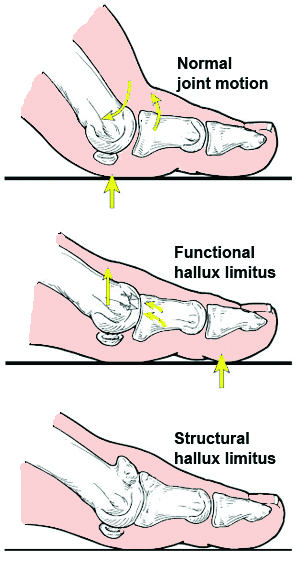 The middle image in the diagram illustrates functional hallux limits; although movement is limited, this is not the result of joint degeneration. During assessment, the toe moves freely whilst there is no weight on it.

The reduced movement is due to a ‘jamming’ of the first metatarsal with the big toe, i.e. no slide & climb.

Research is still unable to determine what causes functional hallux limitus. It may be that particular dynamic foot biomechanics lead to the jamming. In some cases, the first metatarsal being abnormally long or short is thought to place extra stress on the big toe joint.

Other possible causes include: running on the toes, wearing shoes that are too small, wearing high-heel shoes too often, or as a result of a trauma e.g. stubbing the big toe or dropping a heavy object on it.

There are many ways to treat hallux limitus that do not involve surgery, so it is important to get it taken care of earlier, rather than waiting until it becomes totally restricted (hallux rigidus).

The last of the three images in the diagram illustrates structural hallux limitus, often thought to be a progression of the above but can also be a result of a trauma. The repeated jamming we saw in functional hallux limitus can cause a wearing down of the joint cartilage and eventual degenerative arthritis.

If present, this will show up on an X-ray, and in contrast to functional hallux limits, movement can be restricted even when you are not weight bearing. If it goes untreated, range of movement can will decrease, until eventually there is no movement at all, i.e. hallux rigidus.

Both hallux limitus and hallux rigidus can cause immense pain, so it is hardly surprising that the brain finds an alternative (compensatory) way of getting that foot off the floor.

However, compensation patterns do not eliminate the load (force) experienced when hitting the ground during running; they simply shift it to other parts of the body which can lead to pain elsewhere.

If your big toe has limited dorsiflexion, your lower leg will not be able to move correctly over your weight bearing foot (limited ankle dorsiflexion).

As a result, the calves shorten with each stride, and can become extremely tight, causing altered dynamics in the lower leg and pain in both the calf and Achilles tendon.

The human body is a kinetic chain. What happens at one joint will have a knock on effect at another joint. Lack of ankle dorsiflexion when running can lead to an early bending in the knee, which in turn can disrupt the whole efficiency of the gait cycle

Reduced ankle dorsiflexion can increase the duration of time in which the heel is off the ground. The resulting change in foot biomechanics can cause a decrease in hip extension, which may in turn force the hip flexors (on the front of the hip) to work harder than they normally would had optimum hip extension been reached.

This may manifest itself as pain in the hips and/or lower back.

In reality, all therapists should be testing you for reduced big toe mobility when you present yourself with any of the above symptoms.

You can also assess yourself by watching your big toe when you walk. Does it bend back easily and push off the ground without the need for extra effort?

Bear in mind that simply pulling your big toe back is not a test for functional hallux limitus. It is the dynamic weighted movement that creates symptoms.

If you have structural hallux limitus, pain is likely to be elevated when you try pulling the toe back when not standing on it.

If you do suspect limited movement, consult a running specific sports therapist or physiotherapist as they will be able to investigate further using gait analysis and more tests. An X-ray will show up structural changes such as joint narrowing and bone spur formation.

Norms for range of movement

The average dorsiflexion range of motion of the first MPJ during walking is thought to be around 45 degrees.

A grade system of 0-4 is used to describe the extent of hallux limitus/rigidus. Grade 0 represents a dorsiflexion range of 40-60° with no symptoms. The other end of the scale is a Grade 4 in which 0o dorsiflexion is presented along with severe joint degeneration.

Many people assume that running requires a greater range of movement in all joints than walking does.

This is not always true.

In fact, as far as dorsiflexion of the big toe goes, the required range of movement is actually less when running. This explains why some people with hallux limitus suffer less pain when running compared to walking.

As we have already mentioned, diagnosis in the earlier stages allows more treatment options to prevent surgery. Depending on the cause of the symptoms, a podiatrist may be able to fit you with a suitable custom foot orthotics that will restore normal motion to the joint when weight bearing.

Have you ever considered your big toe as a source of pain?
Matt Phillips is a Running Injury Specialist & Video Gait Analyst at StrideUK & Studio57clinic. Follow Matt on Twitter: @sportinjurymatt