Mastering the Marathon- 26.2 as Unequal Halves

The marathon presents a physical challenge that tests the human body to find out not only how fast can the distance be covered, but how well the body can maintain a strenuous activity once its “tank” has been drained.

The physical challenge of the marathon is one of its greatest draws, calling to those who wish to climb a mountain simply because it is there.

Arguably just as challenging as the physical task of the marathon, is the mental aspect of running 26.2 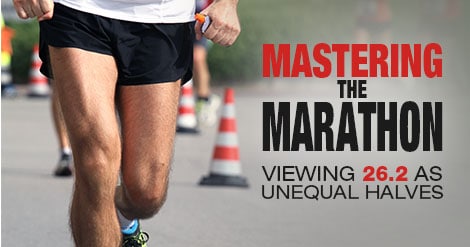 Just as marathoners train their bodies to become efficient and streamlined, targeting their weaknesses and flaws in form; striving to fix them, so too must mental toughness be developed and strengthened before the big race.

An actor rehearses the lines of a play again and again before the big performance; learning the correct sequence and timing of the performance.
So too should a runner spend time in visualization, rehearsing the big race over and over in the mind.

Too often do runners focus on the negative possibilities of race day, latching onto doubt and leaving the mind tumbling in negative summersaults of “what if” and “I can’t”.

An actor does not intentionally rehearse the wrong lines before a play, which would not make sense; instead an actor focuses on and repeats the performance in the way they would like it to happen. Runners should take the time to visualize their upcoming performance in a positive light.

One way to do this, is to decide before hand to divide the marathon into unequal halves.

The marathon is much easier to handle when it is approached from a standpoint of effort-based halves.

Choosing to break the marathon into two pieces, the first 20 miles and the last 10k, helps to focus on two distinctly separate tasks on race day.

The first half of the race (the first 20 miles) is more than twice the length of the second half, but most marathoners would agree that the final 10k is as difficult, if not more so, than the first 20.

Viewing the first 20 miles as a long run is much more manageable than attacking the race as a whole, especially since most runners have at least one 20 mile long run under their belt during marathon training and the distance is familiar.

Keeping the first 20 miles deliberately comfortable with the constant knowledge that “the race begins at 20” will keep you patient as the miles pass, with an expectant outlook on the second half.

A 10K is a long race in itself, and even if you feel fresh and fast at 20, knocking a minute per mile off your pace is not a good idea.

Stick to the plan outlined by your training and your coach, but refocus your mindset to let go of the previous 20 and begin a brand new 10k.

It is best to fully accept the agony of a marathon’s final 10 Kilometers before you reach it. Don’t just anticipate the pain, accept it, welcome it, and embrace it.

The final 10K of a marathon should hurt, it is only when a runner can accept that concept that they can truly reach full potential in the marathon.

Splitting the race into effort-based halves with a longer, more comfortable 20 mile first half and a shorter, more aggressive 6.2 mile second half gives the runner a structure that will prepare him or her for the long stretch of sustained effort for the first 20 miles, and the assertive strain of the last 10k that make up the marathon.

8 Responses on “Mastering the Marathon- 26.2 as Unequal Halves”