Runners Connect » » Injury Prevention Does Sunscreen Affect Your Performance When Running in the Heat?

Does Sunscreen Affect Your Performance When Running in the Heat? 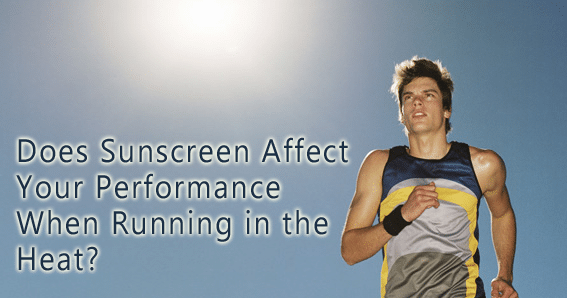 Summer is kicking into high gear across the country. For runners almost everywhere, that means running in the heat.

Hot weather can cause a whole set of problems, but something that’s often neglected is the effect of the sun itself.

Sunburn can be a real pain, but some long-time runners claim that sunscreen clogs up your sweat pores and makes you overheat.

Overheating means your speed will drop, your distance will seem unreachable, and most likely your workout will come to a complete stop. It can be difficult to keep training, especially for a marathon, without running long!

But does this hold true or is it yet another old wives’ tale?

Should you hesitate to lather up with sunscreen before your next big race or important workout?

Don’t worry, we are going to do the hard work for you, check out what we found:

Sunscreen and the heat

The effects of sunscreen on your body’s ability to regulate heat production during exercise isn’t a particularly popular research topic, but there are still three solid studies which examine the issue.

The first and oldest is a 1984 study that looked at the effects of sunscreen on heat regulation in high and low humidity conditions.

Wells and colleagues had 16 men ride stationary bicycles in hot and humid as well as hot and dry conditions either with or without a mildly protective (SPF 8) sunscreen applied to their exposed skin.

Wells et al. found that sunscreen did not have any significant impact on physiological variables like heart rate, oxygen consumption, and sweat loss, but the sunscreen did cause an increase in skin temperature in the hot but dry condition.

The researchers hypothesized that the sunscreen impeded the evaporation of sweat, leading to increased heat buildup on the skin.

However, there were a number of flaws with this study, as pointed out by Declan Connolly in his 1994 Ph.D. thesis at Oregon State University.

Does your skin temperature rise when running with sunscreen?

Wells et al. had their subjects complete a static amount of work (100 Watts of cycling) instead of adjusting the workload to be proportional to the subjects’ fitness.

Additionally, some—but not all—of the subjects drank water during the course of the experiment, and Wells et al. did not report how they calculated skin temperatures.

These deficiencies led Connolly to conduct his own study, which consisted of 22 men undergoing a 45-minute stationary bike ride at 55% of their VO2 max in a hot and fairly dry lab. Each subject underwent the test twice, once while wearing sunscreen (SPF 15) and once while not wearing sunscreen.

This is where it get’s interesting:

Connolly also found no significant differences in heart rate, oxygen consumption, or sweat loss between the two conditions, but in contrast to Wells et al., Connolly found a decrease in skin temperature in the sunscreen-wearing cyclists.

Connolly hypothesized that the sunscreen improved heat loss by “wetting” the skin, aiding the evaporation of sweat from the skin.

How is running performance affected by sunscreen?

Finally, a study commissioned by the US military that was presented at an Australian conference on performance in extreme conditions also examined sunscreen’s effects on cyclists.

Seventeen well-trained male cyclists rode for 60 minutes at 60% of their VO2 max in two trials, one while using sunscreen, and one without.

The researchers found that sunscreen use did not affect any performance or heat-regulation variables, including skin temperature.

So, the balance of evidence to date indicates that sunscreen has no measurable detrimental effects on performance or heat regulation.

Though Connolly and Wells et al. found conflicting evidence related to skin temperature, this didn’t seem to have any impact on heart rate, core temperature, or oxygen consumption.

If sunscreen really were impeding performance by increasing heat buildup, we’d expect to see an increase in some of these variables.

It is important to note that these three studies, which represent the entirety of the scientific research on heat regulation and sunscreen, have some significant shortcomings.

For now though, it looks like using sunscreen isn’t going to impede your ability to run fast.

Moreover, performance is a small sacrifice in comparison to the very real dangers of skin cancer. Your next long run is going to be challenging enough—no need to add to it by finishing beet-red and sunburned.

At least until there’s more robust research done on using sunscreen during exercise in the heat, runners should have no reservations about slathering up with sunscreen to protect their skin.

1. Wells, T. D.; Jessup, G. T.; Langlotz, K. S., Effects of sunscreen use during exercise in the heat. Physician and Sportsmedicine 1984.
2. Connolly, D. A. J. The Effects of an Application of Sunscreen on Selected Physiological Variables During Exercise in the Heat. Oregon State University, Corvallis, 1994.
3. Naughton, G.; Carlson, J.; Gibbs, M.; Snow, R., The effects of wearing sunscreen lotion on thermoregulatory responses during exercise in the heat in adult and adolescent males. In International conference on physiological and cognitive performance in extreme environments, Australian Institute of Sport, Canberra, Australia, 2000; pp 72-75.