How Lactic Acid Works for Runners

Have you ever been running a race or workout, feeling strong, running faster than you ever have before, and you start to think about how great it is going to feel when you cross that finish line with your big PR?

But suddenly your body starts to shut down. You hit the wall, hard, and you can barely move your legs. Every step is like trying to bring your legs out of mud, and your legs go numb or even start tingling.

Time slips away, but every second feels like it takes forever. You realize your fastest run is long gone, and you finish feeling deflated and confused.

What happened to me?

Well, you have probably heard people throwing around the word lactate, or, depending on who you ask, lactic acid buildup.

It’s been blamed for fatigue, soreness, overtraining, and probably more, but until recently, the phenomenon of lactate accumulation during intense exercise was poorly understood.

Today we will dispel some of the myths about lactate at threshold, how to avoid lactic acid buildup while running, and how you can prevent fatigue while improving your lactate clearance. 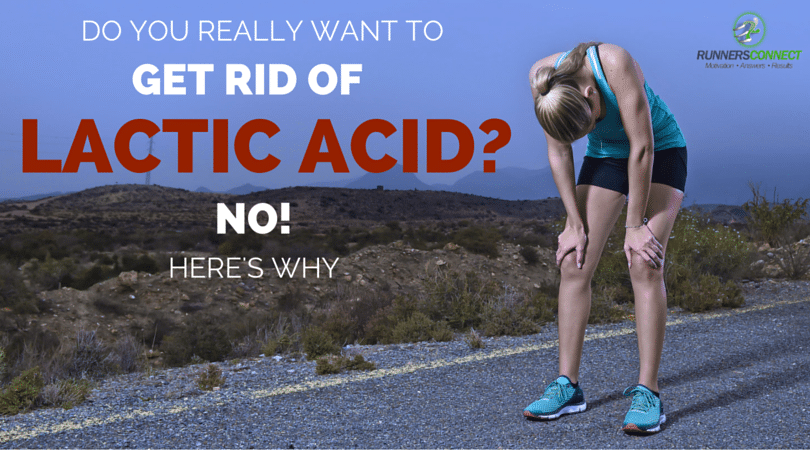 Lactate, or lactic acid as it is commonly known, gets a bad rap thanks to some faulty science from the 1970′s.

While an excess accumulation of lactate contributes to why runners slow down at the end of races, lactic acid itself isn’t responsible for the muscle fatigue that causes you to do the skeleton dance at the end of a race.

In fact, lactate is actually a source of energy.

As you probably already know, your body breaks down glucose for energy, and a byproduct of this process is lactate.

But, for each lactate molecule produced by the body, one hydrogen ion is also formed. Hydrogen ions lower the blood pH and make the muscles acidic.

During easy running, your body reconverts and recycles this lactate back into energy (through the Cori Cycle) and carries away hydrogen ions with it.

Therefore, the production of lactate, and the clearance of hydrogen, will remain relatively constant while running at an easy aerobic pace, which doesn’t require a huge demand for energy.

As you continue to run faster and demand more energy, the production of lactic will slowly increase.

At some point, whether it be too fast a pace or holding a steady pace for too long, the production of lactic acid will soar and your body will no longer be able to convert lactate back into energy.

At this point, lactate can’t grab its hydrogen ion to reduce the concentration of hydrogen in the muscle cell. And, this acidity irritates muscle nerve endings and causes that pain, heaviness, and burning mistakenly attributed to lactic acid.

Why did we used to think lactic acid was so bad for us?

Even these dismembered muscles fatigue after a while, proving that there is a chemical component to fatigue.

When these muscle fibers are analyzed, they show a high concentration of lactate and acid (hydrogen) ions. Therefore, physiologists concluded, the reason for muscular fatigue during exercise is accumulation of a compound called lactic acid.

This theory remained more or less unchallenged for much of the twentieth century.

It was only after the body’s energy supply systems were subjected to rigorous biochemical accounting that some discrepancies turned up.

“Acid” (hydrogen ions) is indeed produced, but not from the exact same biochemical step.

Furthermore, the ratio of lactate to hydrogen ions produced during exercise isn’t 1:1, as you would expect if lactic acid was being produced.

These ambiguities led to a reexamination and eventual overhaul of the “lactate paradigm” in the early 2000s, spearheaded by Roger Robergs.

What Does Lactate Do?

Robergs, an accomplished biochemist, took a hard look at each step in the metabolic process that turns sugars (glucose in the blood and glycogen in the muscles) into energy when you exercise.

Most runners have heard the following story about energy pathways:

Anaerobic respiration, which doesn’t kick in until you’re operating past your aerobic limit, can generate energy from sugar without using oxygen, but results in waste products—lactate and acid.

Robergs and others showed that this common understanding has some flaws.

It turns out that anaerobic respiration functions all the time, turning sugar into a compound called pyruvate, releasing some hydrogen ions at the same time.

Aerobic respiration works to clean up the pyruvate, using oxygen to burn the pyruvate into carbon dioxide and water, which can be exhaled.

The aerobic process also consumes acid (hydrogen ions), which retards the buildup of acid in the muscles.

The generation of lactate is actually a side reaction: when excess pyruvate and acid start to accumulate (when the rate of anaerobic respiration overtakes the aerobic system’s ability to remove the waste), the body uses a pyruvate molecule and a hydrogen ion to create lactate, another way in which it can slow down the buildup of acid.

The lactate can also be shuttled out of the muscles, into the blood, and burned in other areas of the body for more energy.

How Can I Prevent Lactate From Slowing Me Down?

All of this biochemistry might be very interesting to a physiologist, but what about the rest of us who just want to know how to stop it from happening in the future?

We can take a few lessons from this right off the bat:

This proves that your aerobic strength is a huge factor in your performance.

While your body has various mechanisms to buffer the acid produced during high-intensity efforts, all of these are limited.

Only increasing your aerobic fitness will allow you to substantially increase how far and how fast you can run.

Lactate has a greater role than simply causing fatigue allows you to better understand the place of high-intensity workouts at or faster than the “lactate threshold.”

These workouts aren’t just running hard for the sake of running hard—they train your body to produce, process, and burn lactate (as a fuel!) at a greater rate.

This can improve your stamina over short and medium-duration races like the 5k and 10k.

Teach your body the skill of pushing through the pain

Finally, there is still the inescapable fatigue that comes with acid overload.

There really is no getting around this in shorter races.

You can run hard interval workouts and races to improve your ability to buffer the acid produced when running at very fast speeds, but everyone is ultimately limited by the acidity in their muscles and blood.

To help better prepare you, try implementing an interval technique called “Hammer Intervals“, which will teach you how to push through this fatigue.

The final word on Lactate and Lactic Acid

So, is there such a thing as “lactic acid production” during exercise?

Your body certainly produces acid during exercise, and it produces lactate as well. But it’s the former, not the latter, that’s the main culprit for fatigue.

Regardless, it will likely still be a long time before we stop hearing about lactic acid buildup and so on.

The fuss about terminology might be overblown, but understanding the real mechanisms at work when we run hard and get tired can help understand the purpose and importance of the various workouts you use in training.

If you want to understand more about lactate clearance, we explain that in further detail too.

3 Responses on “How Lactic Acid Works for Runners”