Runners Connect » » Injury Prevention How Long Before You Have to Replace Running Shoes?

How Long Before You Have to Replace Running Shoes?

Running is the best form of exercise there is.

Okay, so we may be a little bias, but running is definitely one of the least expensive ways of getting fit, especially as all you need are good running shoes and you are off.

We’ve all heard of the recommendations by shoe companies and running stores about running shoes; when to replace and after 400-500 miles miles we should buy a new pair of running shoes to avoid injury.

But it’s also likely that you know other runners who get endless mileage out of a single pair of shoes with no apparent ill effect.

Today we are going to look into why you need to replace running shoes, and what to look for to know how often to replace your running shoes in the future. We are not affiliated with any company, so you know we are telling you the truth. You may be surprised with what the research found about which is the “best” shoe brand! 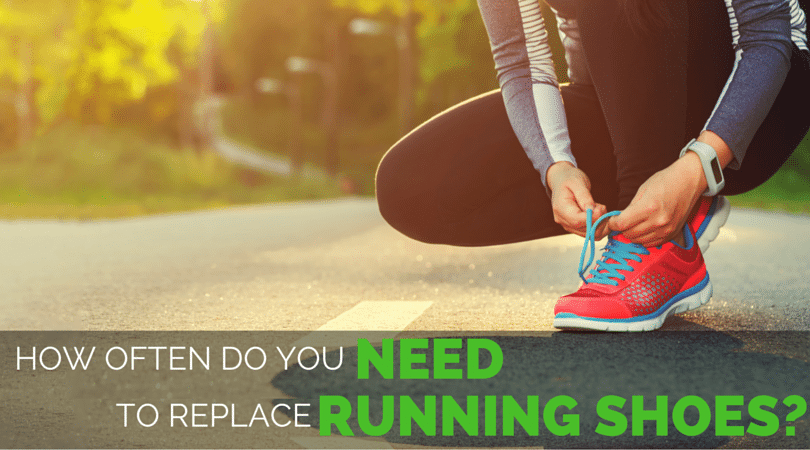 Why Do We Need to Replace Running Shoes?

While most of the visible wear to a shoe occurs on the upper fabric and the “outsole,” the hard rubber bottom of a running shoe, the wear that most affects biomechanics (and thus, the wear most likely to have an effect on injury risk) occurs inside the midsole.

The midsole is the thick layer of (usually white) EVA foam that cushions impact and, in some cases, is designed to modulate your foot mechanics. Many shoes have a “dual density midsole,” denoted by a gray block of denser foam under the arch. This medial wedge, as it is called in the shoe industry, is designed to resist pronation.

While EVA foam is quite resilient, research shows that it still breaks down over the course of thousands of footstrikes.

Shock Absorption is Limited as Shoes Get Older

In a fairly old study, Cook, Kester, and Brunet at Tulane University examined the degradation in mechanical shock absorption in a variety of different shoes.1

First, using a “running machine” which simulated the impact associated with running hundreds of miles in a pair of shoes, the researchers tested in a controlled way how the shock absorption changed over time.

Then, they compared these artificially worn shoes to shoes worn by actual runners over an equivalent volume of running.

In the machine-simulated running, shoes had decreased to 75% of their initial cushion after only 50 miles; this cushioning dropped to 67% after 150 miles and ultimately to 60% after 500 miles.

The shoes worn by the real runners also declined in cushioning, following the same pattern of rapid decrease in cushion initially, tapering off and nearly leveling out at 500 miles of running.

But when worn by real runners, the shoes only dropped to 80% of their initial cushioning—good news for shoe-shoppers.

Here’s something you probably want to know:

The researchers found no significant difference in wear properties amongst many different brands.

The Nike shoes deteriorated just as much as the Adidas or Brooks shoes, despite each shoe boasting different cushioning technology.

So much for a superior brand!

Finally, Cook et al. tested the “decompression” theory, which many runners have likely heard of.

Allegedly, if you alternate between two pairs of shoes to let the EVA foam decompress over 24 or 48 hours, you’ll retain cushioning in your shoes better. This turned out not to be the case.

[bctt tweet=”There was no difference in cushioning retention when shoes were allowed a recovery time between simulated runs.” username=”Runners_Connect”]

Granted, shoe design has changed a lot since 1985. And some preliminary research published in 2004 by Stefan Schwanitz and Stephan Odenwald in Germany indicates that changes in shoe cushioning as a shoe ages may vary between brands.2

But, while the evidence is clear that shoes do change significantly as they accumulate more mileage, does that mean that your running mechanics will change because of it?

Shoes Change Shape as They Wear Out

In one of the few good studies on the subject, Kong, Candelaria, and Smith at the University of Texas at El Paso examined the changes in running mechanics after a group of 24 runners covered 200 miles over the course of their regular training.3

First, at the initial evaluation of running mechanics (before the 200 miles of training), there were no differences between the groups.

This should teach us a thing or two about how shoes can (or rather, can’t) affect running mechanics. But, more to the point, there were only minor changes in running mechanics after the 200 miles of wear on the shoes (none at all in the hip and knee), and no changes in actual forces measured.

Even though we may reasonably predict that the shoes had lost 20% of their cushioning capacity, there was no change in impact forces!

This should come as no surprise to regular readers of this blog, since we’ve seen before that the body adapts to various surfaces by changing leg stiffness. The increased stance time that Kong et al. observed hints that the leg becomes more compliant to adapt to the stiffer, thinner worn shoes.

The other findings of Kong et al. are also in line with adaptations associated with running on harder surfaces, like flatter foot placement.

Additionally, there were no differences in mechanics between wearers of the different shoe types after the 200 miles of training either.

What Does all this Research Mean?

First, we know for sure that shoe cushioning deteriorates over time.

As you accumulate more and more mileage in your shoes, they become thinner and stiffer, almost turning into a racing flat towards the end of their life.

And the not so good news?

This deterioration is worst in the first few dozen miles you run in a pair of shoes—this might explain why some runners find that a shoe that feels great in the store starts to feel not so great after just a few runs.

On the other hand, these changes don’t have a big effect on your running mechanics.

Your body adapts to the gradually changing situation beneath your soles, allowing you to maintain an even stride over a range of shoe conditions.

However, the way your body does this is by altering muscle activation. So, when you run in a shoe that’s thinner and stiffer after 500 miles of training, your leg muscles are tuned to be looser, compensating for the shock absorption lost from your shoes.

There’s no telling how this may affect forces inside your body, even though there’s no change in forces outside of your body.

If you are well into your marathon training schedule, this is probably not something you want to be messing around with!

Finally, don’t worry about “resting” your shoes to let the foam decompress.

I still think swapping between multiple pairs of different shoes is a good idea if you’re a high-mileage runner, but the benefit is more in switching up how your foot is stressed every day than it is in letting your shoes decompress.

When Should You Replace Running Shoes?

Swapping out shoes at 400 or 500 miles is probably still a good idea, but don’t swap out an aging shoe because you liked how it felt fresh out of the box—shoot for shoes that feel good on your feet after 100 or 200 miles of running, since this is when a shoe starts to “bottom out” in its cushioning loss.

Don’t rely on any high-tech gimmicks to preserve shoe cushioning.

It doesn’t seem to matter whether your shoe has gel, air, or springs; the dominant factor is still the EVA foam, and in that respect, all shoe brands are more or less the same.

If you rely on your shoes for a specific biomechanical effect (especially when used in conjunction with a custom orthotic), it’s a good idea not to run too long in the same pair of shoes, since there’s no telling how your body will tolerate the altered surface.

But if you are relatively healthy and just need a comfy pair of shoes to protect your feet, there isn’t any evidence that pushing the boundaries on shoe durability is going to cause any real harm aside from having a pair of shoes that look dirty and smell awful.

When it comes to choosing a pair of shoes to wear, your best bet is to listen to your comfort. Running stores may have recommendations for what they think you should wear, but remember they may be bias towards one brand or particular shoe.

We have found that following what is recommended from your running store gait analysis can actually put you at a HIGHER risk of injury, Matt Phillips talked about this more in his podcast episode about how to chose which running shoes are best for you.

Remember, you are the one wearing the shoes, not the sales consultant!

You know when to replace your shoes, but are you lacing your shoes wrong? Download our Running Shoe Lacing guide for free and get a quick reminder, specific how-to and resources for videos on the best way to lace your running shoes.

40 Responses on “How Long Before You Have to Replace Running Shoes?”