Drinking Caffeine Before Running – How Coffee Will Help You Run Faster

Even the best of the elite runners can easily be beaten without their daily cup of coffee or caffeine before running.

Some runners rely on drinking coffee before running to get them up and out the door, while others find caffeine to be the only stimulant protecting them from having Swingline tattooed across their forehead.

But should you drink coffee before you run? Or is it just a ploy by the coffee companies to sell more expensive lattes.

If you’re a caffeine addict, or even if you only enjoy the occasional cup of coffee, caffeine and athletic performance go hand in hand to help your running.

Yup, that morning cup o’joe can actually make you a better runner.

You don’t have to take my word for it though.

Recent studies show that more than two-thirds of Olympic athletes use caffeine to improve their running performance.

You can be quite sure that if Olympic athletes are using caffeine before they run, it works.

However, you don’t need to be an Olympic caliber runner to benefit from the strategic use of caffeine.

In this article, I am going to outline the specific benefits of using caffeine, what to watch out for, and give you some detailed guidelines for when to take caffeine before a race to perform your best.

when to take caffeine before race

should i drink coffee before i run 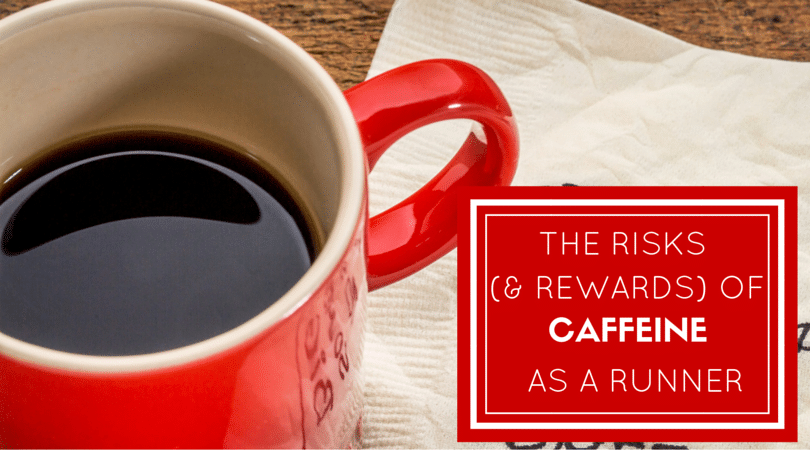 Coffee Before a Run: Caffeine and Endurance Running

Caffeine is actually one of the most widely researched areas of sports performance, perhaps because so many runners rely on it for more than just its potential performance enhancing benefits.

In fact, Alex Hutchinson recommended taking caffeine pills before running as the number one legal performance enhancing product runners can take before a race.

So if you were wondering if coffee before running is bad, by now you probably know what we have found.

But if you are not convinced, here are the benefits of caffeine on running performance:

Just as your morning cup of coffee helps you get mentally ready to face the day, research shows that caffeine boosts your mental alertness, improves your mood, and boosts your desire to run hard.

This is a great benefit for those mornings you’re facing a tough speed workout and you just don’t want to get out the door, or if you’re an evening runner who needs a mental boost after a long day at work.

Even better, for longer events, such as the marathon and half marathon.

If you are following a marathon training schedule, you will know that there are many long weeks of intense and monotonous training that can really test our dedication to the race.

Caffeine increases the concentration of endorphins in the brain.

Yup, those same exact hormones that produce a runner’s high.

For marathon runners, perhaps the most important benefit of caffeine is that it enhances your body’s use of fat as a fuel source, thereby conserving glycogen.

In marathon racing, the conservation of glycogen is critical to performance over the last 10km of the race, or as we like to call it, the second half of the race!

Most researchers agree that caffeine increases the number of fatty acids in the blood stream, which increases the speed at which your body can covert fat to usable energy.

If you are trying run to lose weight (aren’t we all), this is good news.

Increases speed in running long distances and improves your power

Caffeine also enhances reaction time and improves neuromuscular coordination (how fast your brain can send a signal to your muscles to contract and relax).

While this is great for 200 meter sprinters, it can also be beneficial to long distance runners.

You can run faster with less effort.

Another recent study looked at the effect of consuming a caffeinated sports drink on performance in a warm environment.

Cyclists who ingested caffeine completed 15 to 23 percent more work in hot weather than cyclists who used either water or a traditional sports beverage.

Moreover, the cyclists who used caffeine had a lower level of perceived exertion.

If you are running in the summer heat, this will help make it through those hot and humid summer runs.

Helps you get a faster 5k time

While so far we’ve looked at how caffeine can potentially improve varying aspects of running performance, it’s also important to examine if these improvements  translate into actual results on race day.

Luckily, a group of researchers studied this exact question.

Using a 5k race as a test run, the researchers found that runners who used caffeine prior to their 5k race improved by 1.0 to 1.1 percent (this means a 20-minute 5k runner would run 10-13 seconds faster just by using caffeine).

While this isn’t a huge improvement, it does prove that the science translates to real-life running situations.

How Does Caffeine Affect Running Recovery?

While research has clearly shown that caffeine can boost performance, what about using caffeine after a run (whether it be an ingredient in your favorite post run beverage or the result of your cup of coffee on the way to work)?

Caffeine has been shown to enhance recovery when used in conjunction with carbohydrates.

Just in case you needed more reasons to add caffeine to your routine:

We talked about this in detail in our separate article about the 9 reasons runners should take caffeine.

Researchers have found that having a drink with caffeine rebuilds glycogen stores 66 percent more than a drink with just carbohydrates.

Why is it Bad to Drink Coffee Before Running?

The biggest fear in using caffeine when running has been the diuretic effect and therefore possible dehydration issues.

I’ll admit, this is what kept me from utilizing caffeine when I was running at an elite level.

But I was wrong.

Does caffeine make you dehydrated?

While caffeine is a diuretic, exercise counteracts its negative impact on hydration.

In a recent scientific review, researchers from the University of Connecticut found that, contrary to popular beliefs, caffeine consumption does not result in:

A runner can safely have up to 550 milligrams of caffeine (or about five cups of coffee) without affecting hydration levels.

Is caffeine is bad for your health?

In moderation, caffeine consumption does not cause any health problems.

The health benefits of coffee come from its caffeine content and its unique blend of antioxidants.

However, heavy caffeine use can suffer from long term health problems from too much caffeine, ranging from excruciating headaches to insomnia, and it is possible to become physically dependent on the drug.

So, as with any nutritional advice, moderation is key.

How to Caffeine Before Running For Your Best Running Performance

Now that we’ve confirmed caffeine can help your performance, it’s critical to discuss how much caffeine is best for runners.

How much caffeine before a running workout?

The same study that measured the impact of caffeine on 5k performance found that five milligrams of caffeine for every kilogram of body weight (2.3lbs) was the ideal supplementation.

A 150lb runner (68 kilograms) would supplement with 340 milligrams of caffeine, which is about 16-17oz of drip brewed coffee.

Most health organizations recommend no more than 400 milligrams of caffeine per dose.

Err on the conservative side if you’re heavier or you’re concerned about any health-related issues.

When to take caffeine before running?

Caffeine is absorbed quickly and lasts for hours at a time, so timing isn’t critical.

You can ingest caffeine immediately before and during your races without worrying about a delay in the effects.

Is it bad to use caffeine or drink coffee every day?

Specific caffeine supplementation for performance should only be used during races.

If you’re a routine coffee drinker and waking up is impossible without your cup o’joe, than you can stay on your normal routine.

However, it’s not advised to supplement before every workout.

Workouts are not races.

Unlike a race, when you want to run as hard and fast as you can, workouts are usually sub-maximal efforts designed to hit a specific physiological energy system.

Supplementation to boost your performance shouldn’t be necessary.

Do you need to practice with coffee or caffeine?

If you’ve never experimented with using caffeine before a hard workout, don’t let the first time you try it be during a race.

You may find it gets you too jittery or gives you an upset stomach.

You don’t want to ruin all your hard training because you took too much caffeine.

Should runners use caffeine pills, coffee or supplements?

While coffee is the most common source of caffeine, many runners can find coffee to be hard on the stomach.

For example, coffee gives me heartburn if I drink it before I run. So, you may need to experiment with what works for you.

Here are some good sources of caffeine other than coffee:

Do you need to stop taking caffeine before a big race to get the maximum effect?

Surprisingly, the answer to this question is no.

Research has shown that runners receive the same performance boost from caffeine whether they are habitual coffee drinkers or they drink only the occasional cup of tea.

Humans do habituate to some of caffeine’s effects, such as elevated pulse and blood pressure.

So, while I don’t suggest it’s healthy to have a direct line to Columbia for your daily fix, you’ll still get the performance enhancing benefits of caffeine if you drink more than the occasional cup. 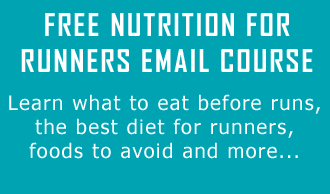