If you have spent any amount of time digging into literature on coaching and training, you probably know there is one running related topic that can be a touchy subject, often leading into lengthy, and sometimes heated discussions; which method of training is best.

Should you accumulate a lot of mileage at an easy pace, only doing a small amount of your running at high speeds?

Or should you try to reach moderate speeds fairly frequently in training so your training sessions are more race-specific? 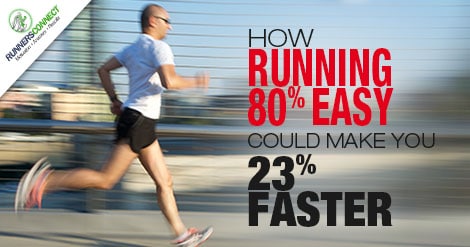 Research on untrained or sedentary people suggests that doing a lot of training near the lactate threshold is a very effective way to improve cardiovascular fitness, but observational studies of elite athletes in a range of endurance sports have found that they tend to spend the majority of their time training at slower, easier paces.1

One of the main criticisms of research into high-intensity training programs for runners is that they are too narrowly-focused on immediate results, since the typical study only lasts four to eight weeks.

With this kind of design, research might miss out on the long-term benefits or drawbacks of certain styles of training.

However, it doesn’t take a PhD to see why it’s very difficult to actually conduct a long-term study: it’s going to be very hard to convince a group of runners to let a scientist tell them what workout to do every day for several months, especially if the runners are already fairly accomplished athletes!

Today, we’re going to look at one study that actually overcame these challenges in an effort to tackle the training intensity problem.

The study, published in 2007 by a group of researchers at several universities around the world, assigned two different training programs to a group of high-level Spanish distance runners and followed them for five months.1

The duration of the study is quite impressive, as is the running ability of the subjects: the twenty men who enrolled in the study had 10k PRs between 30:30 and 35:00.

These men were split into two groups, each of which was assigned a training program.

The second group was issued a higher-intensity plan, with 65% of their training easy, 25% moderate intensity, and 10% high intensity.

The individual workouts varied from week to week, but they were always confined to the same distribution of intensity, and pacing was controlled by heart rate monitors. Mileage was built up in a typical manner, and both groups averaged 50-55 miles per week for most of the study.

To ensure the study’s protocols were followed, the authors set very strict standards on inclusion. The participants had to complete 98% of all assigned training sessions, and they had to wear a heart rate monitor for every run and every workout.

Failure to do both of these resulted in being eliminated from the study. Eight people failed to meet these criteria during the five-month duration. One suffered a chronic injury, and seven more didn’t record all of their training using the heart rate monitor.

This whittled down each group to only six members, which hampers the strength of the results somewhat.

To test the effectiveness of each group’s training regimen, the researchers conducted a 6.5-mile cross country race at the beginning of the study, and again at the end. As you might expect after a five-month training period, both groups improved.

Despite the loss of eight of the subjects, the difference between the groups still remained statistically significant.

What could explain this result?

The authors hypothesized that the body’s responses to high-intensity training—interval workouts, fast tempo runs, and so on—occur fairly quickly and can be attained with relatively modest volumes of training, whereas the benefits of low-intensity training, like easy runs, take longer to sink in.

The authors, one of whom is a professional running coach, also write that higher volumes of intense workouts can be too tough on the body.

They had initially intended to have a third group in the study conduct very-high intensity training, focused mostly on workouts near maximum heart rate, but they discovered that most of the athletes in that group began to show the symptoms of overtraining after only two or three weeks.

Though this study came out eight years ago, it hasn’t fallen on deaf ears.

Writer Matt Fitzgerald recently published a book called “80/20 Running” which extols the virtues of keeping about eighty percent of your training at a low intensity. Did you know Matt wrote an article for us recently on the 10 Tips to Tame the Hills of Boston?

Additionally, the training programs of many (though not all) elite runners follow these principles as well. For example, Moses Mosop, a top Kenyan marathoner, did between 70 and 85% of his weekly mileage at 1.2 times slower than marathon pace during his build-up before the 2011 Boston marathon, where he placed 2nd.

What does this mean for your training?

The core message of this study is that you should seek to balance out high-intensity workouts with more easy running.

If you want to get faster, don’t just do all of your runs faster. You should first make sure you’re getting enough easy running in to support your ability to do faster workouts.

As always, be cautious when increasing your training volume. Other research has found that higher mileage is associated with an increase in injury risk2—but also faster times.3

How good are you at keeping your easy runs easy? What has your experience taught you about your training?