You Want the Runner’s High? Read This 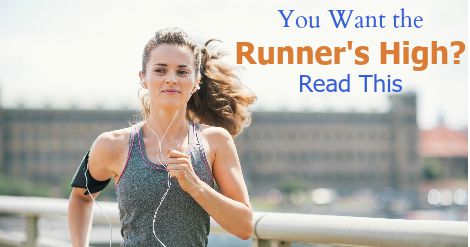 Do you remember when you first started running and someone asked you if you had experienced the runner’s high? Or maybe you are brand new to running yourself, and you have heard others talking about it.

Most of us imagined a moment where you feel invincible. You could run with the fastest elites and keep up. You could run for hours and hours without feeling any fatigue.

Unfortunately, a runner’s high in that sense does not exist, but if you are reading this right now, chances are you are dedicated to your training and like to run, which means you have probably already experienced it.

The concept of “runner’s high” is one of the few shared experiences of runners that has punched through to mainstream society. Even non-runners are at least peripherally aware that going for a run boosts your mood, leaving you feeling energized and euphoric.

But what exactly is runner’s high?

How much of it is a real chemical response to running, and can the science behind runner’s high uncover any useful implications?

Today we are going to explain it, and share how we can make sure we feel that good boost it as much as possible, even if injured.

What Causes a Runner’s High?

Thanks to a memorable quip from the 2001 comedy movie Legally Blonde, most non-runners are also aware that runner’s high has something to do with endorphins. The word endorphin is actually a contraction of “endogenous morphine,” and like real morphine, endorphins reduce pain and create feelings of euphoria when they surge through your brain.

What you don’t get from pop culture knowledge is that endorphins were only hypothesized to be the cause of runner’s high circa 2001—there was some debate over the issue because until recently it was not possible to accurately and non-invasively measure endorphin levels in the brain.

Like many psychoactive compounds, endorphins can’t cross the blood-brain barrier, so if levels of endorphins in the brain spike after exercise, they don’t always make it into the blood.

Measuring endorphin levels directly is a non-starter, since you’d need to drill through the patient’s skull to do it!

A cutting-edge study published in 2008 by Henning Boecker and other researchers at Technische Universität München in Germany sought to find an answer to the question of whether endorphins really were responsible for runner’s high.1

Boecker et al. used a technique called positron emission tomography to study the endorphin response to running. By injecting ten runners with a slightly radioactive tracer compound designed to bind to endorphin receptors in the brain, Boecker et al. were able to track the amount of endorphins being absorbed in specific regions of the brain. A 3D radioactivity detector pinpointed the locations where the radioactive tracer was being absorbed in the brain at rest, and again after a two-hour run.

Indeed, this is exactly what happened.

Boecker et al. were able to show that strength of the radioactive tracer’s signal was inversely related with the runners’ subjective feelings of euphoria. That is, the more endorphins in their brain, the happier and more energized the runners felt!

It might be a little disconcerting to think that our mental well-being is subject to the ebb and flow of chemicals in our brain, but this study’s findings are a pretty big breakthrough.

What else could increase our chances of experiencing a runner’s high?

Other research suggests there’s more to runner’s high than just endorphins, however. Work by P.B. Sparling and colleagues at the University of California – Irvine suggests that a class of chemicals called endocannabinoids are involved, too.2

In a study published in the journal Cognitive Neuroscience, Sparling et al. had well-trained college students run or bike for 50 minutes, then took a blood sample to measure endocannabinoid levels. Unlike endorphins, endocannabinoids do cross the blood-brain barrier, so they are easier to measure.

As you might have guessed from the name, endocannabinoids cause similar effects to the active compounds in cannabis (medical and otherwise): stress reduction, pain relief, a sense of well-being, and relaxation—think of that post-long-run bliss, where you’re tired and mildly sore, but feeling like everything is all right.

Sparling et al.’s findings indicate that runner’s high is more than a simple surge in one chemical in the brain; it’s a complex dance of psychoactive compounds released in response to exercise that boost your mood, raise your energy level, yet also relieves anxiety and makes you feel calm and relaxed.

A 2007 study even found that an exercise program was just as effective as prescription anti-depressants in patients with major depressive disorder.3

Can we Become Addicted to Seeking Runner’s High?

The biggest downside of all this appears to be the negative effects of not getting your regular dose of runner’s high.

Boecker et al. write that the opiate-like effects of runner’s high might be responsible not just for the beneficial mood-boosting effects of exercise, but also the withdrawal-like symptoms when you stop exercising on a regular basis, and the addictive aspects of what they call “excessive exercise,” where runners continue to train despite an injury.

Running is great, but you can get a similar exercise high from long, continuous aerobic exercise of any type. Doing some cycling, pool running, or elliptical machine work will keep you from getting too disheartened from a lack of runner’s high when you’re injured.

Of course, the pool or the gym still pale in comparison to a long run on wooded trails or a scenic rural road—runner’s high isn’t all about chemicals.

How can I Achieve a Runner’s High More Often?

Now we know what a runner’s high is, and what form of exercise works to find that euphoria, but how can we increase the likelihood of enjoying our running, especially when we hear that running is mostly about grinding through training?

Here are the 7 steps to increasing your chances:

Make sure your easy days are slow enough

We have talked about this one in multiple articles, including one which found that running 80% easy can make you run up to 23% faster! Rather than having easy days and hard days, a lot of runners end up running hard days and harder days. Running faster can help in a time crunch, but you are putting yourself at risk of overtraining, and when that happens, your days of enjoying running may be a long time away.

By setting aside a few runs each week to be easy, you will find you enjoy those runs more (even if you are sore), and this will increase those endorphins for after, and you will run faster on your harder days, increasing the feel good factor on those days too!

Those easy days are a great time to get together with friends to catch up. Rather than paying for a meal out, you could meet for a run. If you are running easy enough, you will be able to have a full conversation, and before you know it, your run will be finished, and you can pat one another on the back for a job well done.

Explore a new place to run

Running does not always have to be about staying around your neighborhood. Find a trail, path, or even take a drive to a park to take in the beauty of nature. Running gives you the opportunity to focus on the simple things in life, and finding those places will rediscover why you love to run, and increase your chance of a runner’s high.

Soak in the achievement of others

Head to a nearby race and stand near the finish line. Watch the euphoria on other runners faces as they complete the race. This is especially effective if you watch a marathon. You will see in their faces that the struggles and hours spent were all worthwhile for the pride they feel as they crossed the finish line.

Find what food works for you

Nothing scares away the runner’s high like an upset stomach. Take some easy runs to test out what foods your body responds best to before running, and stick to those. If a bowl of pasta the night before a run makes you feel sluggish and slow, even if everyone around you is piling it in, take comfort in the fact that you are going to be the one feeling strong tomorrow, when they may be wishing they did not have that extra serving.

The only way your body is going to reach a state of comfort within running is if it has enough fuel to keep going. We have an article on calculating how much you need to eat after your fast while you sleep, but no matter what time of day, you need to find what works for you. What you eat before you run is one of the biggest factors affecting how you feel while running.

Think about how far you traveled during your run. Think about the ups and downs. The struggles that you overcame, and how you are a stronger person, both physically and mentally for making it through. Be proud of yourself, and smile as you soak in that endorphin rush.

There are so many more benefits of running and ways that increase your chances of feeling good during and after your runs. Share with us in the comments what helps you experience a runner’s high.

9 Responses on “You Want the Runner’s High? Read This”