Runners Connect » » Training Articles What are the Benefits of Splitting up a Run?

What are the Benefits of Splitting up a Run?

When I was in high school, our summer training program always required a ten mile long run every week.

The only exception was if you were going into your freshman year—in that case, you were permitted to split your ten miler into two five-mile runs, done in the morning and afternoon.

Once you were older, you had to do the whole ten miles in one run, since our coach believed there was a greater benefit in one long run versus two short ones.

Surely you’ve thought, halfway through a sixteen-mile long run during marathon training, “Maybe I can just stop now and add on more tonight.”  Is it really that much worse to split up your runs?

Today, we are going to investigate how it will affect your fitness, and whether you get the same effects whichever way you get the milage in. Afterwards, we will help you figure out how to increase mileage safely while maintaining the key workouts you need to get to the next level. 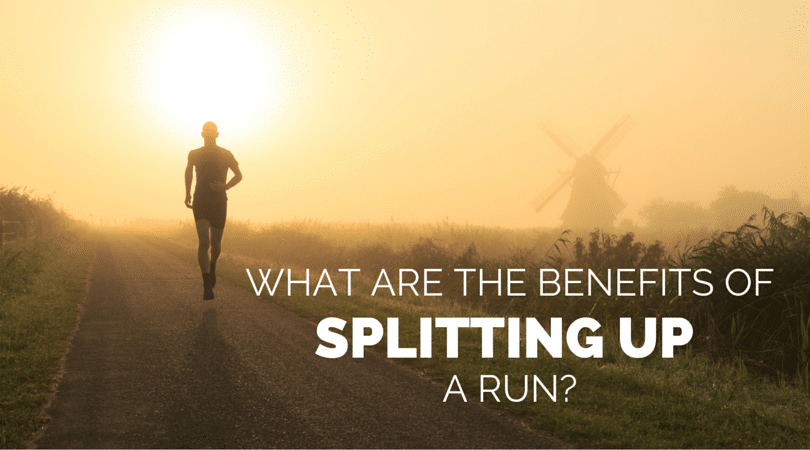 What has the Research Found About Breaking Up Runs?

This topic has been investigated by exercise physiologists, but the research to date has focused mostly on splitting up your weekly training, not daily training.

So, most studies will investigate an exercise protocol like 30min twice a day every other day versus 30min every single day.

Though it’s not ideal, this is the science we have to work with.  If there’s an important difference between different weekly distributions of training, it becomes more likely that changing your daily training distribution (i.e. splitting up your runs) will matter too.

Some preliminary work suggests that twice-every-other-day training does indeed induce different responses in your muscles at the cellular level.

A 2007 study by researchers at the University of Copenhagen in Denmark examined how seven untrained men responded to a single daily training program and a twice-every-second-day training program.1

After ten weeks of this exercise protocol, the leg that was worked twice every other day lasted significantly longer during leg extensions to exhaustion.

Further, analysis of muscle biopsies demonstrated that this same leg had an increased level of citrate synthase, an enzyme associated with your ability to produce energy aerobically—so more citrate synthase means more endurance.

In 2008, researchers in Australia published a similar study that looked at more sport-specific applications.2

In their study, fourteen cyclists were split into two groups.  The first performed a long, steady ride on one day, followed by an interval session the next day.  The second group performed both sessions on the same day, separated only by a one to two hour rest.  On the alternating days, the second group rested.

All the subjects followed this protocol for three weeks, and all the cyclists performed a one hour steady ride followed by a one hour time trial at the beginning and end of the study.

Like with the previous study, training twice every second day resulted in increased levels of cellular markers of aerobic fitness, including citrate synthase.

However, this came at a cost—during the interval sessions, the riders training twice every second day weren’t able to ride as hard (since they’d just finished a hard, steady run, and the daily training group got to do their intervals fresh).

Nevertheless, at the end of the study, both groups improved their time trial performance by the same amount.

Without taking a global look at the effects of training, it can be difficult to say whether a certain type of training has a desirable effect.  It’s entirely possible that daily training increases levels of some other important enzyme, one that the researchers didn’t look for.

It looks like the main factor that actually impacts your sport-specific performance is your overall training volume, not necessarily how you distribute it during the week or throughout the day.

Does it really matter?

Another convincing piece of evidence comes from a 2006 study by Tim Meyer and colleagues at the University of Saarland in Germany.3

The first group served as a control, and did no training for twelve weeks.

The second group was assigned a fairly typical program, training five times a week for thirty minutes each session.

The third group did what the authors termed “weekend warrior” training: two seventy-five minute training sessions on consecutive days every week, with no training on the five days in between!

The training distribution was radically different between the two exercising groups, but shockingly, after twelve weeks, the fitness gains were the same.

Statistical analysis uncovered no significant differences in maximal oxygen uptake or heart rate during a static level of exercise.  Both groups, however, improved compared to the non-exercising controls, which predictably had no real improvement in fitness.

How Do I Safely Increase My Mileage to get to the Next Level?

The research, which admittedly does not address our direct concern—splitting up a long run into two different sessions done on the same day—nevertheless suggests that the real factor in improving your overall fitness is how much exercise you do per week, not how you distribute it.

There is still a case to be made for the specific effects of spending time on your feet.

If you’re training for a long race, like a marathon, it’s still very important that you do long continuous runs (and build them up in a safe, progressive way), so your legs are ready for the duration of the race.

When preparing for a shorter race, like a 5k or 10k, research suggests that you should get in your mileage however you can, even if it means splitting up a run.

If you are just starting a training program, and looking to increase your mileage, there are a few ways of looking at your progression:

This is likely the most common method runners use to increase mileage. Even though no study has shown 10 percent to be better than an 8 or 12 percent increase, it is still pretty safe for most runners.

The 10 percent rule makes it relatively easy for runners to increase their milage each week without risking injury. If you were to start from 20 miles per week, your progression would look like this:

You get the point. If this seems very slow, it shows you just how long your body needs to get used to running. If you have never run before, it should take you a lot longer to progress to a marathon training schedule than it will if you are a more advanced runner.

There is one major problem with the 10 percent rule in that it does not allow for adaptation, which we talked about in further detail in another article on finding your optimal mileage.

We discussed the 10 percent rule in more detail in our research about it, if you are not convinced it is for you, keep reading.

The second method you could use to increase mileage is to use renown coach Jack Daniels advice. Daniels recommends that you increase your mileage for a few weeks in a row, by a larger amount, then maintain it.  Both methods build the same mileage, but this method allows for time for your body to adapt.

An example of increasing your mileage using this method would be to jump from 20 to 27 miles per week, followed by holding it at 27 for three or four weeks, followed by another jump to 35.

Interestingly, research has found that bones are actually weaker for the first month after a new stress like high-impact exercise (like running), while they resorb tissue and make a change to the bone structure. The equilibrium method gives the bones time to become stronger before you increase the mileage again.

The down week approach

The third way you could safely increase mileage is by increasing your mileage each week (using an 8-12% increase), but making sure that every 3-4 weeks, you take a “down week” where you reduce your volume significantly before moving on with the progression.

An example of this would be:

Many elite and high mileage runners use this method to build their mileage without risking injury. This helps your body to recover and prepare for future increases.

Similar to the equilibrium approach, this method gives the bones time to adjust to new stresses. There is not an exact formula for how many weeks to go before taking a down week, so it will require some testing to fit your body.

Some runners can get away with increasing every week and are able to run injury free for the majority of their running lives, but if you have any history with overuse injuries or overtraining, progressing your mileage safely is extremely important.