Can a Tuning Fork Detect a Stress Fracture?

There are two words that strike fear into any runner. When something hurts and you know in your heart that this is something serious, you hope and pray that it is not this, you know, the one that will put you in a boot for 6 weeks, immobilized.

As runners we are very diligent, we do our homework….even if it means asking the one doctor we know we shouldn’t listen to; Dr. Google.

Your mind starts to spin out of control as you search for a diagnosis, anything that will tell you what it is.

One of the methods that has been traditionally used to diagnose a stress fracture, without the costly MRI or Bone Scan is the tuning fork. In this article, we are going to look into how reliable it is to use a tuning fork to give you some peace of mind, without paying hundreds (or thousands) of dollars for a medical analysis. 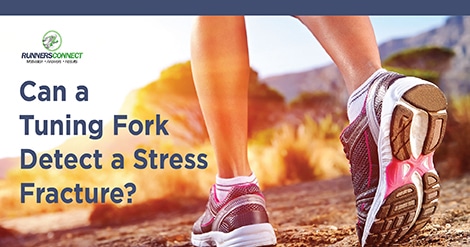 If you played a sport in high school or college, you probably had to see the athletic trainer at some point.

Though trainers are often viewed as an initial point of contact for injury care with only rudimentary training, the best trainers can rival doctors in knowledge and experience.

These grizzled veterans of the turf field and the tartan track can have innumerous tricks up their sleeve, whether it’s curing foot pain with an expertly-placed pad of moleskin, easing a blister with a band-aid and a strip of tape, or modifying an ill-fitting shoe with a precise cut from a razor blade.

One of the tools employed by old-school athletic trainers is the tuning fork. It’s used as an in-the-moment diagnostic tool to determine whether a runner has a stress fracture.

When the tuning fork is struck, then held in contact with the bone, high-frequency vibrations travel into the bone, causing sharp pain if a stress fracture exists—or so the logic goes.

It seems like a reasonable proposition, and if it really works, the tuning fork would be a fantastic addition to any doctor or trainer’s inventory. A tuning fork can be had for less than ten dollars, versus up to two thousand dollars for a single MRI scan.

[bctt tweet=”Can a tuning fork reliably detect a stress fracture? You can find out here!”]

Are Tuning Forks As Reliable as an MRI?

Two peer-reviewed scientific studies have been conducted on the efficacy of the “tuning fork test” for diagnosing a stress fracture.

The first was published in 1997 by Emil Patrick Lesho, a military doctor stationed at Fort Richardson in Arkansas.1 His study examined fifty-two patients suspected of having a tibial stress fracture. Lesho employed both a tuning fork test, where a 128 Hz tuning fork was struck and held in direct contact with the painful spot on the shin, and a traditional bone scan, one of the gold standards for diagnosing stress fractures (the other being MRI).

In evaluating a diagnostic test, there are two important parameters to measure: the sensitivity and specificity.

If an abnormality does show up on an X-ray, the probability that you do have a stress fracture is 95%, meaning the test has high specificity.

In Lesho’s study, the sensitivity and specificity of the tuning fork test were determined to be 75% and 67%, respectively—not too bad compared to a plain x-ray, but rather poor compared to the MRI’s 100% and 86%.

Another study published in 2009 looked at the tuning fork test as well, but this time, in distance runners specifically.3 Robert Wilder and colleagues at the University of Virginia studied forty-five distance runners with a suspected stress fracture.

Wilder et al. conducted an experiment similar to Lesho’s, but tested 256 Hz and 512 Hz tuning forks in addition to the 128 Hz fork used by Lesho.

The 256-Hz tuning fork performed best, with a sensitivity of about 90%, but unfortunately, the test had very poor specificity: only around 20%.

This means that many people without stress fractures will nevertheless have pain during a tuning fork test, making it difficult to use it as a diagnostic aid.

A review study published in 2012 examined Lesho and Wilder et al.’s results, recommending that clinicians hold off on relying on a tuning fork test until there’s more research validating it.4

The review study criticized the methodology of Wilder et al. and noted that testing procedures were not standardized in either study, so the results can’t be pooled for more statistical power.

It’s a PDF with the treatment options for runners with stress fractures.

So, is this old-school trainer’s trick busted?

For now, it appears that a tuning fork test isn’t sufficiently accurate to rely on it as mainline diagnostic tool.

Its biggest weakness is its inability to correctly identify negative cases—some people without stress fractures still seem to get pain during a tuning fork test.

If you think you have a stress fracture and you don’t have any pain during a tuning fork test, that’s a good sign, but it’s still not enough to return to training full-steam.

Perhaps in the future, research will validate a specific testing procedure and particular tuning fork frequency that produces better results, but for now, it can’t supplant traditional diagnostic methods.

[bctt tweet=”Interesting read about tuning forks to diagnose stress fractures. Check it out!”]

What if I have been diagnosed with a Stress Fracture?

In the past, we have conducted lots of research on stress fractures, meaning those late night, frantic google searches can stop as you can find everything you need in one place. Here are our Stress Fracture related posts:

Could Eating Too Much Protein Increase Your Risk of Stress Fractures?

Will Supplementing with Calcium Reduce Your Risk of Stress Fractures?

Will Bone Stimulators Speed Healing of a Stress Fracture?

The Ultimate Runner’s Guide to Stress Fractures: Causes, Risk Factors and How to Return to Training

How to Return To Running After a Stress Fracture