Simply put, it’s neglecting the training in the months between goal races.

It could be “taking a break during the cold winter months” or “I don’t have another race on the calendar, so just taking it easy until I do”.

Unfortunately, this approach to training between goal races is what typically produces plateaus.

Now, that doesn’t mean you need to be 100% focused and on point with your training 365 days a year.

What it does mean is that often the training you do between your goal races is as important, if not more important, to your long-term progress than the 16 weeks leading up to your race.

If you’ve plateaued in your progression or you’ve ever wondered “what is my potential”, then this article will explain why and how to get yourself out.

Why training between races matters

When we look at how training progression works, we can easily see how plateaus occur when you don’t training effectively between goal races.

I think the easiest way to show this is with a graph.

This represents a year of training when you focus on just your two goal races each year.

As you can see, you start in January with a “fitness level” of 4 hours for the marathon. As your training progresses, you slowly get fitter until on race day you’re in 3:50 shape.

Then you take a small break. You don’t stop running completely, but you don’t have a direction for your training. Maybe you cross train a bit more, but overall you don’t focus on running.

As a result, your running fitness slowly decreases (I know technically it increases on this graph, but the Y axis is your “fitness level/time”. It doesn’t drastically drop and you don’t go back to zero.

Then August hits and you start getting serious about your November marathon. You pick up your 16 week plan and get to work.

The problem is, since you’re again beginning your training from the same starting fitness you did in January, the progress you make only gets you back to 3:50 fitness.

Now, maybe you decide to train a little harder the next training cycle, hoping the increased volume and intensity will break you through this plateau.

But that’s not going to result in huge progresses in fitness. You’ll make marginal gains (if you don’t get hurt from training harder), but you’re not going to see the needle move much.

Now, let’s take a look at what your progress looks like when you training appropriately between goal races. 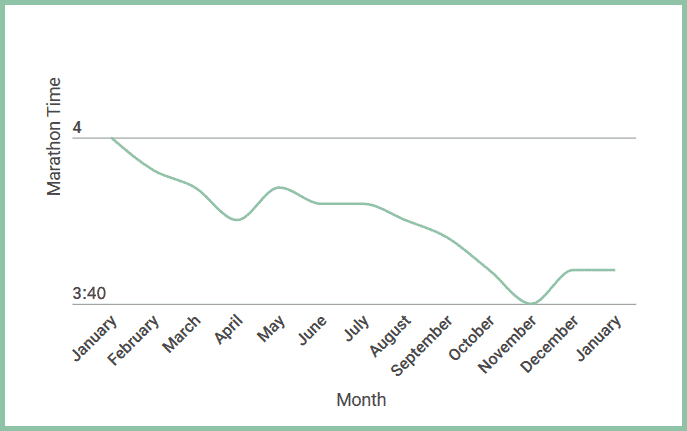 As you can see your progression from January to April is the same, so you finish with 3:50 fitness.

But, this athlete focuses on training in between the races.

Yes, your fitness takes a slight hit after the race as you recover properly. Plus, the progression isn’t as rapid as when you’re in an “all in” training mode like the 16 weeks before a goal race. You’re simply putting in smart, specific work (more on what that means below) – nothing crazy and not even at 100% intensity.

The result is that when you start training in August for your November race your fitness level is equal to, or maybe only slightly behind, that of what it was in November. Consequently, you make progress from August to November and finish in 3:40.

This is how you continually make long-term progress.

When does this not apply?

Like all discussions on training theory, I know I’ll hear the “well, I did basically nothing between my last two races and still improved”.

Good for you. Here’s the likely reason why.

Beginners and those whose previous race times are nowhere near their potential won’t hit this plateau for a couple of years.

This is because your starting fitness is so low (compared to your potential) that the progress you make in training is fairly dramatic. As a result, your regression between goal races doesn’t get you back to your initial starting state.

As you continue to get closer to your potential, you’ll eventually run into the plateau problem. Moreover, it means you’re not progressing as fast as you could be.

How to train between races

Okay, so it’s apparent that training between your races is important. The question really is “how do I train between races to maximize potential?”

The good news is that, if you don’t want to, you don’t have to be in full-bore training mode between races. You can still reduce the intensity, mileage and focus and make progress.

You need to focus on your weaknesses.

That means if you’re a speed demon or have noticed that your shorter distance races are better, in comparison, than your longer races then you should concentrate on endurance based workouts, long runs, and aerobic development.

If you’re an aerobic monster, if you’ve run a few marathons in a row, or maybe you’re an older runner, then you should focus on improving your speed and mechanics.

The reason this works so well, even when your intensity is reduced, is that it allows all of your energy systems to balance out.

When you’re strong in a particular area or focus almost entirely on one distance, the primary energy systems used for that event are maximized in training. The energy systems you don’t use get little work and lag behind.

Unfortunately, at some point you will hit a point of diminishing returns where your stronger system can’t progress until you improve the lagging system.

A good way to visualize this concept is to think of a how window blinds work.

To raise a blind, you usually have two strings you need to pull. Each string controls one side of the blind.

If we imagine the blinds themselves to be your race performance and the strings to represent separate energy systems, you’ll find that you can only raise one side (pull one string) so far before you need to also begin raising the other string.

Therefore, by focusing your training correctly between races, you’re able to make progress long-term, even without training as hard.

How to implement this advice

It’s simple – take the training between goal races just as seriously as you do during the race build-up itself.

Again, that doesn’t mean your training has to be as intense (it certainly can be, and this will accelerate your rate of improvement). You can still reduce your mileage, number of running days, and the mental energy you put into training each day.

But, by having a specific plan to address your weaknesses, you can adjust the intensity of your training up and down and still make progress race-to-race and year-to-year.

Have you made this mistake in training? Or, are you facing a plateau now and think this might be the reason?