Trail Running: Sprain-Proof Your Ankles by Gaining The Right Balance 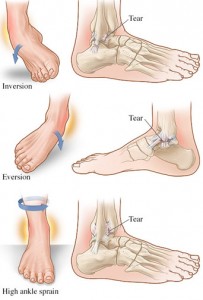 It’s finally getting to be the time of year when dirt trails are clearing off, meaning that trail runners, cross country athletes, and anyone else who enjoys running over more challenging terrain on occasion will be hitting the trails soon.

While running on trails has a number of advantages, one drawback is that you are likely at a greater risk for sustaining an ankle sprain than if you stuck to the roads (though road runners are no stranger to sprains either, given the abundance of rocks, ruts, potholes, and curbs on the roads).

More problematically, once you’ve sustained one ankle sprain, you are at a higher risk for sustaining another.

Though ankle sprains are often dismissed as a minor injury that takes care of itself, the scientific literature shows otherwise.

In one representative study by M.S. Yeung and colleagues at the Hong Kong Sports Institute, a survey of recreational and competitive athletes found that 73% had suffered from multiple ankle sprains, and more significantly, 59% of these reported recurrent problems like ankle pain, instability, crackling sounds in the joint, and weakness.

While this survey was of athletes among many sports, other studies suggest that there is no shortage of runners who get ankle sprains either.

The initial injury process in an ankle sprain usually involves encountering an unexpected change in surface which “tips” the ankle to one side or another, injuring the ligaments. The commonality of recurrent problems, particularly ankle instability, seems to increase the risk for additional ankle sprains in the future, causing a feedback loop where smaller jarring impacts at the ankle become more likely to induce a sprain. This can lead to running on uneven surfaces or making diagonal, cutting motions very difficult, even when you have recovered.

A 1988 study by Stanley Garn and Roberta Newton is a good example—30 subjects from the US Naval Academy with a history of two or more sprains of one ankle were tested on their ability to maintain a single-leg balance stance and their ability to discern small movements at the ankle joint. The majority of the subjects were substantially worse at balancing and perceiving ankle motion on their “bad side” (the one which had suffered the recurrent ankle sprains) when compared to their other side.

Fortunately, there is some good scientific evidence that some simple balance training can reduce the risk of sustaining ankle sprains. Two similar studies published within the last 10 years demonstrate this.

The first, conducted by Timothy McGuine and James Keene at the University of Wisconsin, tested a balance-training program on a group of several hundred high school soccer and basketball athletes during their sports seasons. Below is the outline:

Based on this, it seems that balance training, while helpful for healthy athletes, is more beneficial for those who have suffered an ankle sprain in the past.

This finding was confirmed in the second study, published by Evert Vergahen and others in Amsterdam. Using a similar approach as McGuine and Keene, Vergahen et al. followed 116 volleyball players during their competitive season. Like in the previous paper, half the subjects followed a balance training program for several weeks, with the other half serving as a control group.

At the conclusion of the study, the subjects in the experimental group had suffered significantly fewer ankle sprains, but unlike in the McGuine and Keene study, this finding only held for athletes with a history of ankle sprains.

So, while there is some evidence that a healthy runner might benefit from doing single-leg balance training to reduce the risk of an ankle sprain, the most important finding in the papers we’ve reviewed is:

Runners who have already suffered ankle sprains in the past should definitely be doing balance training several times a week.

You can begin by following these few simple procedure:

Doing these kinds of exercises will improve your balance and hopefully allow you to dodge the problems associated with recurrent ankle sprains, especially if you are a trail or cross-country runner.