Runners Connect » » Training Articles How Much Will Running in the Wind Slow You Down?

How Much Will Running in the Wind Slow You Down?

For months you have put in hours of work diligently following your marathon training schedule. You have pushed through those mental barriers. Given up hours of socializing with friends.

Your race plan crumbles before your eyes. Running into a headwind for a marathon does not sound fun.

How is running in windy conditions going to affect my race?

Any runner, especially one who lives out in the country, up in the mountains, or along the expansive plains of the Midwest, knows how wind affects performance.

What we’ll try to do today is look into running in windy weather and see if we can come up with a “rule of thumb” for wind resistance and running performance.

As we all know too well:

If the wind is pushing me, it can only mean one thing, on the way back I will be running into a headwind.

How much will it affect you? 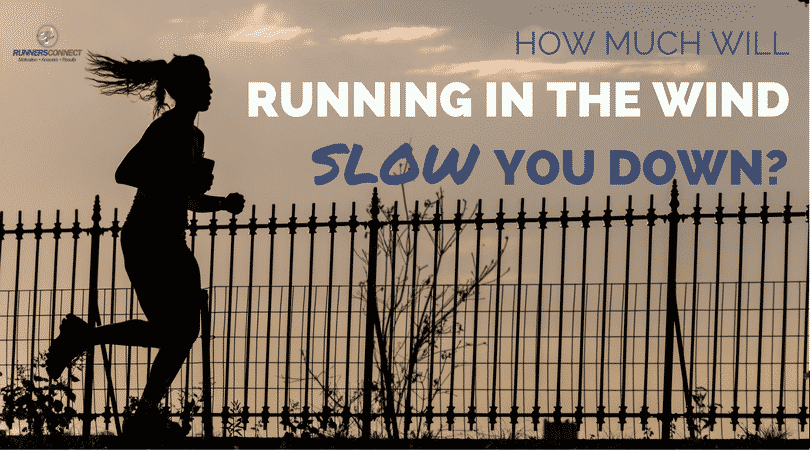 Today we’re turning our attention to the role of wind resistance in aiding or impairing performance, a topic that’s only received spotty coverage over the years.

Much of the initial work was hammered out in the ‘70s and ‘80s, while more recent work tends to focus on the effects of wind in the sprint events, perhaps inspired by the surge of sub-10 second hundred meter times since the late 1990s.

Research on Running in Wind

The first study we’ll look to was published way back in 1971 by L.G. Pugh, a researcher in London.1 In his experiment, he had his subject (there was only one, an international-caliber middle distance runner) run along a treadmill cleverly mounted inside a wind tunnel.

Pugh measured the oxygen consumption of his runner over a variety of running speeds and wind velocities.

He found that oxygen consumption, and therefore energy cost, increases with the square of the airflow over the body.

So, the performance hit of a 10mph wind is four times greater than that of a 5mph wind, and the additional resistance running into a steady wind at 5:40 mile pace is twice that encountered when running into the same wind at 8:00 mile pace.

In an additional experiment, Pugh measured the oxygen consumption of his runner first while running alone into a headwind, then while running one meter behind another runner.

Pugh’s study found an 80% decrease in wind resistance when drafting off another runner! This corresponded to about a 6% drop in oxygen consumption for the given pace.

Pugh confirmed these findings by taking airflow measurements in the wake of a single runner, then computing the effective air resistance for a runner-shaped object one meter back.

From his measurements, it appears that there is still some benefit from drafting even two or three meters behind another runner.

In a later study published in 1980, C.T.M. Davies investigated the effect of headwinds and tailwinds on three subjects using a similar treadmill-in-wind-tunnel setup.2

Like Pugh, he found that oxygen consumption increases (and therefore, performance decreases) proportional to the square of the wind speed.

While a tailwind does aid performance significantly, you only “get back” about half of what you put into a headwind when you turn around and run with it at your back.

But Davies rightly points out that this relationship is diminished slightly during outdoor running—on a treadmill, any tailwind that exceeds your running speed is wasted, as you must remain in place on the treadmill.

However, results from real-world track races make it clear that, even in overground running, the benefits of a tailwind do not entirely offset the drawbacks of a headwind.

If you are running 6:00 mile pace with a 10mph tailwind, a tailwind equivalent would increase your performance by about 6 seconds per mile.

The equivalent headwind (6-minute miles into a 10mph wind) would slow you by about 12 seconds per mile.

While this rule is rather rough and based on treadmill studies, it’s reasonably applicable to racing speeds for most road runners.

Davies also conducted some crude measurements of “drafting” behind other runners and found his data in agreement with Pugh:

Trailing another runner by a meter or so can remove up to 80% of the energy cost of air resistance, making it a very attractive decision on a windy day.

According to Davies, a mile (on a day with no wind) tucked behind another runner is four seconds easier than running it alone!

Does running in the wind cool you down quicker?

One final consideration when it comes to wind is its effect on heat removal from the body.

As pointed out in a 2012 review of climatic effects on marathon running by Greg Spellman, air resistance affects not only the forces you have to overcome, but your body’s rate of cooling.

While running with a tailwind certainly helps you move faster, the effect of running in “still air” on heat removal cannot be ignored.

As far as I know, there has been little to no published research on this effect: to what extent does the increased heat retention in running with a tailwind detract from your running performance on a hot day?

And conversely, how much does increased cooling from a headwind offset the increased wind resistance?

Boston Marathon participants and organizers were ecstatic about the 15mph tailwind on a 63-degree day in 2011, which propelled hundreds of runners to personal records.

But would participants in the 2007 Chicago Marathon, marred not only by 88-degree weather but a paltry 6 mph windspeed, have run better with a brisk wind to cool them?

We’ll have to wait on future research to answer that question.

How Will Windy Conditions Affect My Running?

We’ve seen how the basics of the effects of air resistance have been known to exercise physiologists for some time.

The performance hit from air resistance increases exponentially with faster running speeds and wind velocities, but fortunately, up to 80% of the performance decrement can be eliminated by drafting about a meter behind another runner.

Additionally, using a very rough rule of thumb you can anticipate the effect of wind resistance in a road race:

Headwinds aren’t always your enemy, however, since a brisk wind can aid cooling on a hot day.

When it comes to choosing where you want to race, keep these factors in mind. Check out the weather history for the area and see which way the wind tends to blow.

Also try to enter races where you know there will be plenty of competitors running the same pace as you, so you can save some energy by “tucking into the pack” like a middle-distance runner in a track race.

Finally, make sure you take advantage of a tailwind when you’ve got one!

These tips are known to many elite runners and meet directors, who take heat, wind, and the competitiveness of the race into account when planning when to attempt a new record.

Some of the best races in the world are held on cool spring and summer nights, after the winds die down as the sun sets and a world-class field toes the line.

Is it going to be cold for your upcoming race?

It will help estimate how much your times will be impacted by cold (or hot) weather. Find out exactly how much to adjust your workout and race paces.

4 Responses on “How Much Will Running in the Wind Slow You Down?”