Runners Connect » » Marathon Nutrition Do You Even Need to Replace Electrolytes?

Do You Even Need to Replace Electrolytes?

Runner’s are determined, committed, and hard working. We will do anything to keep improving our running, and do whatever little things we need to run faster and reach our goals. We know one of the major components of this is fueling and hydration.

We see the commercials, we see the elite runners chugging it down, and we are led to believe that we need that sugary solution to recover right, run faster and run longer.

What about all the negativity surrounding sports drinks? What exactly does it do?

Pretty much any sports drink you can find on the market will have three main ingredients: water, sugar, and electrolytes.

The need for water is pretty self-explanatory—you sweat out a lot of it, you get thirsty, and your body instinctively urges you to take something to drink.

The weather and the intensity of your workout dictate how much and how often you need to rehydrate. But, luckily, thirst is a great indicator of when you need water. You can listen to our podcast with Tim Noakes to hear more about that.

As for sugar, if you’re doing a workout, long run, or race that takes you longer than 90 minutes, you’ll need sugar (or some other form of carbohydrates) to replenish your body’s fuel stores so you don’t slow down when you start running out of carbs to burn.

But, what about electrolytes? How necessary are they? And when should you consume them during training? 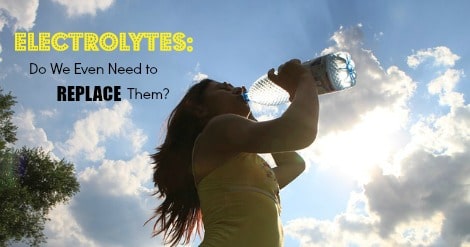 How necessary are electrolytes?

When we talk about “electrolytes,” we’re primarily referring to sodium ions, which make up the bulk of the non-water content of your sweat.

Sodium is what makes your sweat taste salty, and it’s the primary constituent of the electrolytes lost in sweat.  Some potassium is lost in sweat as well, but potassium losses are about one-tenth of sodium losses.

According to traditional logic, if you’re losing electrolytes in your sweat, you need to replace them with a sports drink.

Some people have even suggested that rehydrating without replacing electrolytes lost in sweat can lead to hyponatremia, a dangerous medical condition where the sodium levels in your blood are too low.

Although electrolytes are indeed lost in sweat, they are at a lower concentration in sweat than in blood.  So as you sweat more and become dehydrated, the sodium levels in your body rise, as the fractional losses of sodium have a concentrating effect.

Research on the amount of sodium lost in sweat

In a 2004 review article, Edward Coyle, a professor at the University of Texas-Austin cites research showing that, even in very long bouts of exercise, the amount of sodium lost in sweat is quite small compared to the body’s overall sodium reserves.

And a 2001 study by three scientists at the University of Iowa found that a sodium-free sports drink performed just as well as a traditional sports drink when it comes to rehydrating during exercise.

Tim Noakes, a professor at the University of Cape Town in South Africa, argues that electrolytes are never necessary, even during multi-hour races.  In his 2012 book, Waterlogged: The Serious Problem of Overhydration in Endurance Sports, he cites research showing that your body adjusts the sodium content of your sweat based on your dietary sodium intake.

Noakes’ research suggests that if you regularly run long workouts in the heat and have low dietary sodium intake, your body will lower the salt content of your sweat so you’ll never run out.

Is sodium valuable at all?

Researcher Edward Coyle does not go quite as far.

In his review article, he concedes that sodium isn’t necessary in shorter workouts or races, but writes that “the inclusion of sodium in fluid replacement drinks has some theoretical benefits, and the addition of sodium poses little or no risk.”

Coyle recommends drinking something with sodium in it when your run stretches longer than two hours.

What should I drink to keep up my electrolytes?

These are all interesting findings, but their practical implications are somewhat limited for runners.

Even if it’s theoretically possible to do just fine in a half or full marathon drinking a solution with carbs and water, it’s unlikely that the contents of sports drinks are going to change anytime soon.

If you are drinking Gatorade for the carbs, you’re getting the electrolytes along with it for the foreseeable future.

The good news is that there doesn’t seem to be any real harm in consuming electrolytes.  However, if you’re doing a short or moderate-length workout when it’s hot out, you don’t need to worry about replacing electrolytes when you rehydrate.  Just plain water is fine.

However, this does seem to indicate pretty clearly that heavy doses of electrolytes through products such as Nuun, salt sticks, and other electrolyte replacement options is unnecessary.

That being said, there is a product out there that will help you replace lost electrolytes without those heavy doses. EnduroPacks is a spray product that can be added to any liquid. This way you can change your intake of electroylyes based on the workout you did, and how much you you sweat during that time.
[bctt tweet=”Thankful @Runners_Connect is explaining electrolytes in this post, no more sugar drinks!” via=”no”]

How to develop your optimal hydration strategy

This is the type of research that makes developing a solid nutrition plan so difficult.

It’s clear that simply drinking or fueling as much as you can isn’t the best approach when it comes marathon nutrition.

Despite conventional wisdom, loading up on electrolytes isn’t going to prevent cramping and pounding sports drinks to stay hydrated can leave your stomach feeling bloated.

Moreover, drinking more to try to replace electrolytes can mess with your carbohydrate intake and result in taking in too much sugar at one time, causing your stomach to actually slow down the rate it delivers glycogen to your working muscles.

If you are using the product we recommended earlier in the post, EnduroPacks, you will be able to control your electrolyte intake, but otherwise, you are better off without the sports drink.

During the webinar, we’re going to discuss how to calculate your physiological data (how many carbohydrates you’ve stored, what percentage of carbohydrates you’ll burn, how much fluid you’ll sweat, and more) along with a step-by-step plan in the final few days before the race to help you create a nutrition plan that works.

Want to join the webinar to learn how you can avoid the marathon bonk? Then join our limited-time webinar.Click Here to See Available Times

[bctt tweet=”I have signed up for this free Webinar from @Runners_Connect to create my nutrition plan, you can too!” via=”no”]

What if I keep cramping during a marathon?

We explain how to overcome cramping in a marathon, as well as what you need to know about Fatigue vs. Cramping vs. Bonking to help you prevent it from happening again!

The Simple 3 Step Calculation To Vanquish The Marathon Bonk

How to calculate your sweat loss and re-hydration rate to maintain optimal performance.

How to develop your individualized fueling plan using you sweat rate and glycogen usage.

3 Responses on “Do You Even Need to Replace Electrolytes?”