Runners Connect » » Training Articles How Reliable Are GPS Watches in Tracking Your Pace? A Look at the Scientific Literature

How Reliable Are GPS Watches in Tracking Your Pace? A Look at the Scientific Literature

One of the most critical skills you need to develop as a runner is calibrating your “internal speedometer.”

If you’re racing a 5k and your goal is to run seven-minute miles, it’s very important to be able to hit the right pace!

This applies to threshold workouts, tempo runs, and pretty much every other kind of training too. Elite runners can hit a given pace within a second or two per mile— so how can you foster this kind of precision yourself?

One option is by using a GPS watch. Only a few years ago, GPS units were big, bulky, and very expensive. But as technology has progressed, GPS watches are now available that are nearly the same size as a regular running watch and priced very reasonably.

It should be pretty obvious that a GPS watch can help you hit the right pace when you’re wearing it, but does it actually help instill a sense of internal pacing—that is, if you run without the watch, will you still be able to hit your splits? 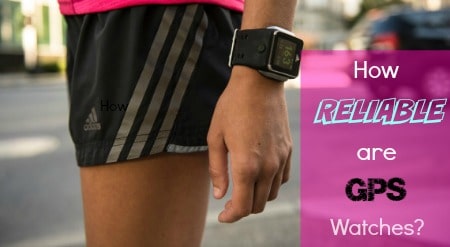 Will your internal pacing still work without a GPS watch?

This was precisely the question asked by Jacob Smith, Matthew Moran, and John Foley of SUNY Cortland and Sacred Heart University in a study presented at a 2010 conference and later published in a scientific journal last year.

The authors examined whether college distance runners using a GPS watch during lactate would learn to control their pace more accurately than those who did not receive any pacing feedback.

At the study’s conclusion, everyone did another LT run without a watch.

Remember, neither group got any pacing feedback—not even mile splits—during the final LT run, so being able to hit the proper pace within four seconds per mile is pretty good.

How reliable are GPS watches?

Like any other training tool, GPS has its limitations.

A study published in April of this year by Jonathan Rawstorn and other researchers at the University of Aukland demonstrated the shortcomings of current GPS technology over short intervals.

Rawstorn et al. were testing the validity of GPS for tracking the movements of soccer players, so they used two interval-style drills, a sprint/jog/walk around a loop, and a shuttle run between two lines, to test how accurate a GPS watch would be for about eight miles’ worth of interval work.

The back-and-forth trials in the shuttle run test are not of much interest to a runner, but the loop repeats, done on a 200m loop, are representative of the kinds of tight turns you might find when running on trails or doing loops at a neighborhood park.

The GPS watches overestimated the distance traveled on the loop by almost three percent—not too relevant if you’re just going for a run, but notable if you’re doing a workout or a race on winding trails.

Other work published last year in The Journal of Strength and Conditioning Research also looked into the reliability of GPS watches in various environments. Nielsen et al. reported that, on a flat, straight path with a clear view to the sky, a GPS watch is within one percent of the true distance of a run.

Again, it’s not a big deal if your 10-mile run is really 10.6 miles, but if you’re doing a workout on a one-mile loop that’s off by a hundred meters, that can be a big difference in time!

A GPS watch can be a great investment. Smith, Moran, and Foley’s research shows that getting real-time feedback on pacing from your GPS watch can teach you how to properly pace yourself in workouts or races, so if you’ve had problems with pacing in the past—and who hasn’t?—there’s never been a better time to get a GPS watch.

That being said, you do need to know the limitations of the technology: it won’t be as accurate on tight turns or wooded trails. Even in suboptimal situations, a GPS watch is still fairly accurate, but do expect an error margin of 3-6% if you’re taking a lot of tight corners or don’t have a clear view of the sky.

2 Responses on “How Reliable Are GPS Watches in Tracking Your Pace? A Look at the Scientific Literature”