The Benefits of Balance Training for Runners 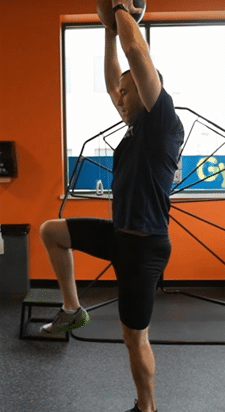 There are a few strength exercises that seem to be staples among runners: leg lifts, clamshells, hamstring stretches, glute bridges, and a few others.  One of these exercises, which you’re sure to see being done by friends and competitors in the running community, is balance training.

Improving your balance or proprioception—your body’s internal sense of the positioning and motion of your joints—is lauded as a good way to treat or prevent injury by physical therapists and athletic trainers.

Today we’ll look into the science behind balance training, including its efficacy at improving your balance and proprioception, as well as its effect on injury risk.

What is balance training

Balance training is a very popular prescription for treating or preventing ankle sprains. While a sprained ankle is not an overuse injury, studies on balance training and ankle sprains can help us better understand how improving balance can affect proprioception, biomechanics, and overall coordination.

One such study was published in 2004 by Evert Verhagen and coworkers in the Netherlands. Verhagen et al. followed 116 volleyball players over the course of several months, splitting the players into an experimental group which followed a balance-training routine, and a control group which did no balance exercises.  Much of the balance routine was done on a wobble board for increased difficulty.

At the end of the study, Verhagen et al. found significantly fewer ankle sprains in the experimental group, though curiously, a higher risk of knee injury, but only in players who’d already suffered previous knee injuries.

A similar study on high school athletes, published two years later by Timothy McGuine and James Keene at the University of Wisconsin, also found that a balance training program decreased the risk of ankle sprains in basketball and soccer players.  Like Verhagen et al., McGuine and Keene’s exercises included several variants of single-leg balancing, often with a wobble board.

The authors of both papers hypothesized that the balance training programs worked by increased proprioception.

With better awareness of the ankle’s position relative to the ground and other obstacles, as well as stronger muscles controlling the ankle, subjects were less likely to suffer an ankle sprain.

The next logical step when considering whether this is relevant to overuse injuries from running is to find out whether these improvements in proprioception translate into better running mechanics or efficiency.

Unfortunately, there are not direct studies on running biomechanics and balance training; the closest the scientific literature gets is a 2005 paper by Gregory Myer and others in Cincinnati which examined, in part, the effects of a balance and coordination training program on the biomechanics of landing and jumping from vertical drops like a plyometric “depth jump.”

While decidedly different from the mechanics involved in running, deficits in knee mechanics in more basic motions like single-leg squats have been linked to poor knee mechanics overall, which would carry over to running.

Myer et al. evaluated 41 female athletes before and after completing a seven-week balance and coordination program, finding improvements in both landing mechanics in the vertical-drop test and improved strength and coordination.

Extrapolating from this, there might be some benefits in improved knee or ankle mechanics from doing balance training as a runner, although this is far from proven.  In terms of injury prevention, the news is again good for ball-sport players who are likely to suffer traumatic knee or ankle injuries, but less conclusive for runners.

A 2005 study by Carolyn Emery and other researchers at the University of Calgary in Canada found that a six-week home-based balance training program reduced the overall incidence of injuries in high-school aged basketball, soccer, football, hockey, and volleyball players.

Measurements of balance, such as the athletes’ ability to stand on one leg with his or her eyes closed, also improved significantly.  The control group, which did not do balance exercises, did not improve their balance and suffered more injuries (mostly ankle sprains).

And a 2007 paper from Yale University likewise found that athletes, both male and female, with more accurately-tuned proprioceptive abilities in their “core muscles” were less likely to suffer knee injuries than those with poor proprioceptive senses.

Is balance training worth it?

So, is it worth your time to do balance and proprioception exercises as a runner, if your main concern is overuse injuries?

Balance training requires relatively little in terms of equipment or time invested, so if you want to add on some ancillary strength training to your daily routine, balance work is not a bad way to go, especially if you are a trail runner at risk of turning your ankle or if you play ball sports like basketball or soccer recreationally.

Verhagen et al. found that balance training was associated with a recurrence of knee problems, but only in those with a history of them.

While Verhagen et al. point out that it’s unlikely that their relatively simple balance training program caused the knee injuries, they nevertheless recommend that athletes currently suffering from overuse injuries to the knee, such as patellofemoral pain syndrome (runner’s knee) or patellar tendonitis, refrain from balance training.

All of the studies reviewed in this article used multiple balance exercises, most of them being variants on the common “one-leg stand” exercise.  You might find just balancing on one leg to be challenging early on, but as your balance improves, you can add in dynamic movements with your free-hanging leg, like hip extension, flexion, abduction, and adduction, or make the static balancing more difficult by closing your eyes, using a wobble board, or standing on a foam balance mat.

More advanced variants can involve tossing a basketball or medicine ball against a wall or back and forth with a partner as you remain balanced on one leg.  And as with all single-leg exercises, you should always switch sides after finishing and do the exercises on the other leg!

If you’re interested in adding balance exercises to your training routine to improve your running form and efficiency, checkout our 6-week  Running Form Course that will help you run with proper form by teaching you the science of running biomechanics and provide you with a simple-to-follow, progressive set of exercises, drills and mental cues to help you make lasting changes to your form.

GET STRONGER NOW
No Thanks