How to Use Age Grade Calculators Effectively

A few weeks ago we gave you some suggestions on how you can accept change and progress as a masters runner from our expert masters runner Amanda Loudin. One of the suggestions she made was to use age grading tables to keep your motivation levels high while competing against others. We even created an age grade calculator for you that you can access at the bottom of this page.

Are age grade calculators even reliable?

Today we are going to look into just that. We will dig deeper into the age grading system to clear up some misconceptions, and see how reliable age-grading systems are for determining how good your performance really is. 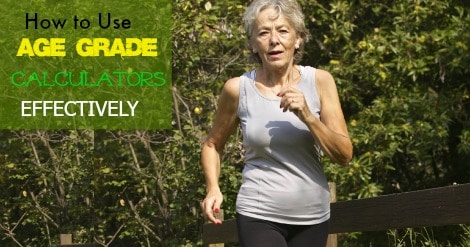 The emergence of age grade calculators

If you’ve run in or perused the results of a large road race recently, you have probably noticed percentages listed next to each runner’s time, labeled “AG” or “Age Grade.”

It’s no secret that runners slow down as they age. The slowdown is not as steep or intense as you might think, but it definitely exists.1

Age grading is a statistical attempt to measure the relative strength of a performance for an athlete of a given age. Most people agree that a 55-year-old running a 20:00 5k is a more impressive time than a 25-year-old running 19:00, even though the younger runner’s performance is faster in an absolute sense.

Age grading systems quantify exactly where you stand relative to the predicted all-time best for all runners of your age.

Why a predicted best, and not the actual age-group world record?

If you relied on the current world record, the age grading system would require frequent updates and revisions, and you wouldn’t be guaranteed a smooth progression when moving up in ages.

To get around these sorts of problems, age-grading calculators use a smoothed curve to predict the best performance for a given age level. This curve is derived using statistical analysis of top performances, and is extremely close to the actual all-time bests for every age from about 16 to 50, but actual all-time bests jump around outside of that age range.

Do you have it all wrong?

Age-graded performances are commonly misunderstood as being percentiles—e.g. an age-grade of 68% meaning you are faster than 68% of all runners your age.

What the percentage actually does is measure the fraction of your race time that is equivalent to the predicted all-time best for your age and sex.

This sounds awfully confusing, but all it means is that the age-grade calculator divides the predicted best ever performance by your race time.

How does that help me compare?

This is perhaps not quite as meaningful as a percentile, but your age-grade percent allows you to compare your current times with your PRs from when you were younger.

By converting your bests from high school, college, or your prime racing years into age-graded percentages, you can see if your times are as good or better than you were as a younger runner.

Some age-graded calculators will even use the slowdown factor in reverse, spitting out what your equivalent time would be for a runner in his or her prime.

How reliable is age grading?

Age-grading as a concept is great, but there are a few drawbacks to the current methods used.

First, there are several different “versions” compiled by different statisticians floating around, and these will produce slightly different results when you plug in the same performance level.

Further, as records are broken, the models will eventually need to be updated. Though a smooth curve prediction of age-group bests will last longer without revisions, as more and more records get broken, the formula will gradually get less accurate.

The Howard Grubb / Alan Jones age grading calculator, which is probably the most commonly-used variant, gets updated about every five to ten years.2

Any method based on single-age all-time best performance will be significantly impacted by outlier performers. Often, great Masters athletes will go on a multi-year tear, setting single-age records for every age they pass through.

In compiling the data for an updated age-grading table in 2006, Alan Jones writes that he was forced to toss out all of the performances of Olga Kotelko, who set dozens of single-age world records for several track events in her 80s and 90s, because they were so far superior to anything else.3

If he had included them, it would have skewed the entire prediction curve for women’s performances!

A better method would probably be to use a predetermined “depth marker” as a standard, like the 20th-best or 100th-best all-time performance, but this would massively complicate the data collection process.

You are probably wondering:

Age grading doesn’t take into account your actual rank among runners of your age. Even if your age-graded percentage hasn’t budged in twenty years, you’re probably still ranked much higher now relative to your peers—think of how many fewer people run at age 60 compared to age 40!

It would be nice if there were another method of rating performances by “age rank” (your position relative to all runners your age, not just the best). Maybe that can be the next big project for running statisticians!

[bctt tweet=”Confused about how age grading works? Read this post from @Runners_Connect” via=”no”]

All in all, age-graded performances are a pretty reliable indicator of how close you are to the all-time best runners of your age.

As long as you understand how age grade percentages work and know how to use them, they can be help you stay competitive with yourself and with other runners well into old age.