Push or Pull? A Look at Running Propulsion

“Some people create with words, or with music, or with a brush and paints. I like to make something beautiful when I run. I like to make people stop and say, “I’ve never seen anyone run like that before.” It’s more than just a race, it’s a style. It’s doing something better than anyone else. It’s being creative.”

–  Steve “Pre” Prefontaine, middle and long-distance running sensation who at the time of his tragic death in 1975 at just 24 years old held every American record between 2,000 and 10,000 meters.

Together with other running legends of the time Frank Shorter and Bill Rodgers, Prefontaine played a huge part in inspiring the 1970s “running boom”, and nearly four decades on the search to find the supreme style that will help runners to “do better than anyone else” is as alive as ever.

Though regular visitors to Runners Connect will be familiar with our strong belief that there is a rarely a “one-size-fits-all” prescription when it comes to running, much can be learned from observing and examining the different schools of thought that emerge as elite coaches and biomechanics experts pursue excellence.

Differences in our anatomy, physiology, lifestyles and experiences mean that what works well for one runner will not necessarily do so for another, and indeed a successful coach could well be defined by their ability to look at the athlete in front of them and then select appropriate elements from the various successful running styles that exist.

In this article, we will take a look at two contrasting theories on how PROPULSION is generated in running and how they lead to the promotion of different running techniques supported by different coaching cues and drills. As you read, bear in mind that I am not advocating any conscious attempt to modify your form whilst out running. Safe, effective modification to running form comes via drills and ancillary strength & conditioning, not by trying to change an isolated movement whilst out running.

For many, the role of the Gluteus Maximus in hip extension is seen as paramount in driving the body forwards during running. This hip extension begins the moment the foot starts its journey towards the ground. Elite run coach Bobby McGee can be seen explaining this in his USA Triathlon Training Series stressing that in order for elastic return (stretch reflex) to occur the leading leg can not just “fall” to the ground. He compares propulsion to the loading of a pogo stick, with the propulsive phase of the leg action being hip extension whilst the leg is unloaded. The leg and knee extend by pushing the foot downwards under the body using the glute & quad muscles from the highest position the knee reached, until the foot is applied to the surface. McGee points out that force plate research shows how a downward force must be applied to load the leg for rapid return:

“The trick is to apply the downward extension of the leg early enough, i.e. from the point where the knee has reached its highest point on the forward swing phase til the foot contacts the surface. As soon as contact with the ground is made, the structure is held rigid so that the musculature can load elastically and when momentum aided by the correct lean places the body sufficiently past its centre of mass, the spring can unload and power the body forward.”

Steve Magness, Head Cross Country Coach at University of Houston , points out that often the mistake is made to try and get the foot off the ground as quickly as possible. While having a short ground contact time is beneficial, it needs to be the result of transferring force faster rather than trying to get quick with the foot.

“Loading up the foot means allowing it to move through the cycle of initial contact to fully supporting the body.”

Magness argues that a combination of the stretch reflex and the basic passive mechanical properties of the lower leg means that the lower leg will lift off the ground and fold up (towards the buttocks) without the need for any conscious hamstring recruitment. How close the lower leg comes to the buttocks depends on the amount of hip extension and should not be actively enforced.

Other schools of thought do not give as much importance to the role of the Gluteus Maximus in propulsion during running. A good example can be seen in the teachings of the Pose Method of running, developed by 2-time Olympic Coach Dr. Nicholas S. Romanov.  Romanov explains:

“Glutes keep your hips, i.e. your GCM (general centre of mass) stable, centered and straight – exactly where the hips should be during running. That’s it. If anybody assigns any other “important role” to the glutes’ work in running, he or she simply does not know or understand the anatomical and biomechanical functions, characteristics and intended work of the glutes. Glutes, as well as any other muscles or muscle groups, do not directly create the propulsion of the body forward.”

The Pose Method believes efficient propulsion is achieved by making use of gravity. The theory is that by attaining optimum body alignment and lean angle (the “pose”), the body “falls“ to a certain point (a critical range from ~5° to ~30° depending on the athlete’s objectives), which when combined with a suitably timed “pulling” of the weighted foot (a swift hamstring contraction pulling the foot towards the buttocks) the runner manages to swiftly change support to the other foot, and so the cycle repeats.

The “pull” of this “Pose-Fall-Pull” technique is said to be the only part of running that requires effort, arguing that the traditional teachings of pushing in order to maximise hip extension waste energy and are counter-productive. We can see how this contrasts with the methodology described earlier by McGee and Magness. In the words of Dr. Romanov:

“In the Pose Method, the concept of gravity as a motive force for the forward movement is the most fundamental one, and the data from the extensor’s paradox article confirm this idea. / The commonly accepted understanding of the leg extension as a forward propulsive force in running is not supported by the data of the electrical activity of the muscles responsible for the knee extension in this research. But at the same time it did not come to any conclusion about the role of gravity, as well. / Most runners sincerely believe in ‘push off efficiency’ and its necessity in order to run, because of their perception and seemingly true visual appearance.”

The initial obstacle that people often have with the PULL theory presented by Pose is the concept that gravity can help horizontal propulsion. After all, most of us recall being taught that gravity pulls you down to the earth, so how it can help you move forward (unless of course you are running downhill)?

Canute’s Efficient Running site provides an interesting theory into how the PULL method achieves a shorter time in stance phase. (For those of you interested in a detailed, objective look at the Pose Method, I recommend a look through Canute’s site.) It suggests that the “conscious focus on rapid lift off leads to tensioning of the major muscles of the leg at point of impact thereby facilitating efficient capture and recovery of impact energy via elastic recoil.”

This links in with reasoning given by McGee and Magness in focussing on PUSH, and as Canute mentions later in his article reigning Olympic champion Usain Bolt (whose style is said by advocates of Pose to exemplify the effectiveness of the Pose Method) describes his own focus whilst running as “After completing the drive, get tall, knees up, dorsiflex, get your toes up, plant, push again.” Canute goes on to suggest that for less finely tuned runners, conscious focus on pushing can result in too long a delay on stance so in other words he does not recommend it for everybody.

The aim of this brief look at two differing schools of thought has not been to say one is better than the other. You do not need to know any of the above in order to run. However, running is a skill and for those of you looking to improve your distances and times, you will eventually need to consider your running technique. In a world where so much information is available for free at the click of a button, it is easy to become overwhelmed with an abundance of contrasting advice and promises.

Examining different theories like we have done above reinforces our belief that there is no one running style that can guarantee you success, no super-secret, hidden formula that will transform you into a running god or goddess. What you can look for however is a coach who will look at YOU as an individual and then select appropriate elements from the various successful running styles that exist.

There is no one optimum way to run, but every runner has an optimum way of running inside them. Movement specialist Ben Cormack of Cor-Kinetic.com summed it up nicely the other day on Twitter:

“The role of a coach or trainer is not to fit you into a system but to rather fit the system around you.”

If you’re interested in learning more about how to improve your own running form and develop the most efficient stride for YOUR biomechanics, signup for our 6-week online form course. The online course will help you run with proper form by teaching you the science of running biomechanics and provide you with a simple-to-follow, progressive set of exercises, drills and mental cues to help you make lasting changes to your form.

I hope you have found this insight stimulating and look forward to seeing the discussion continue through your feedback and comments. 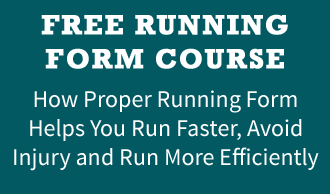 Why you can have the right amount of strength, but if your muscles aren’t firing correctly as a result of poor form, you’ll still get injured. Plus steps you can take to improve.

How bad running form causes cramping in the marathon (not hydration or electrolytes) and the exercises you can add to your training to make sure you don't cramp again!

6 Responses on “Push or Pull? A Look at Running Propulsion”