Runners Connect » » Beginner Running Is There a Best Breathing Rhythm To Run To?

Is There a Best Breathing Rhythm To Run To?

One of the most common problems faced by particularly those new to running is lack of breath. After all, it’s hard to run very far if your lungs feel like they’re about to burst out of your chest.

As is so often the case when we start something new, we assume we must be doing something wrong – in this case somehow breathing incorrectly.

A quick search online uncovers a host of advice as to the ‘right’ way to breath when running, including what ‘rhythm’ of inhale to exhale we should be using.

Should we be breathing a certain way when we run? Is there an optimum rhythm to use that will help us overcome fatigue? Let’s take a closer look… 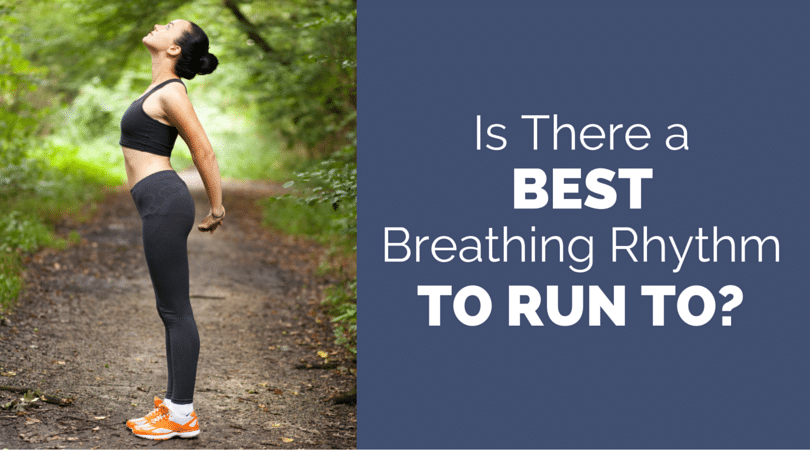 What is a Breathing Rhythm?

The relationship of performance and rhythmic breathing was the subject of a study by Bramble & Carrier in 1983 entitled ‘Running and Breathing in Mammals’. The study described how mammals synchronize body movement with breathing patterns in order to ensure sufficient respiratory flow, a process they referred to as Locomotor-Respiratory Coupling (LRC).

Quadrupedal species were observed to synchronize the locomotor and respiratory cycles at a constant ratio of 1:1 in both the trot and gallop. Human runners, on the other hand, were observed using various rhythms, ‘although a 2:1 coupling ratio appears to be favoured’.

It was suggested that this may be due to a reduction in mechanical constraints on respiration as a result of the evolution of bipedal gait, allowing greater flexibility in breathing pattern.

A study ten years later by Bernasconi & Kohl ‘Analysis of co-ordination between breathing and exercise rhythms in man’ (1993) showed that for runners with a high degree of co-ordinated breathing, the oxygen uptake for a given work load proved to be ‘slightly but significantly lower than during running with weak coordination.’

The paper also concluded that ‘the degree of co-ordination during running could be increased significantly by paced breathing.’

The research definitely seems to point to the idea that having a breathing rhythm can benefit runners, but the question is, is there one particular rhythm that reigns supreme?

Is There An Optimal Breathing Rhythm?

As runners, we are obviously always keen to hear of anything that will help optimize our performance – running form, footwear, footstrike, cadence – if there’s one best way to get the job done we want to know about it, and breathing pattern is no exception.

The problem is, in the case of breathing, advice seems to vary depending on which expert you listen to.

Elite running coach Jack Daniels, best known for his 1998 book ‘Daniels’ Running Formula’ is often quoted as favouring the 2:2 rhythm for his runners as it provides ‘the most efficient ventilation of the lungs.’

However, delving deeper into what Daniels actually says, this is his preferred rhythm for the majority of a distance race as runners may well switch to a 1:2 or a 2:1 rhythm at the end of a race in order to finish strong. Daniels points out that for slower paced easy runs, a 3:3 or even 4:4 rhythm may be better.

[bctt tweet=”Want to learn about the best way to breathe when running? Take a read of this”]

Bill Leach, another very experienced running coach, favours a 2:3 rhythm based on the idea that runners should be exhaling for longer than the inhale.

His rationale is “the atmospheric pressure is greater than the pressure in your lungs, which means you need to push the air out to let it rush back in.” Other coaches, however, believe that the inhalation should be longer because ‘your diaphragm contracts when you inhale and makes your core more stable’.

Could we be increasing injury risk by breathing?

One particularly interesting theory taken from the 2013 Daley, Bramble & Carrier paper that gained a lot of exposure later that year thanks to the book ‘Running on Air: The Revolutionary Way to Run Better by Breathing Smarter’ (Budd Coates and Claire Kowalchik) was that if your ratio of ‘inhalation steps’ to ‘exhalation steps’ is even, i.e. when you add them together you get an even number (2:2, 3:1, 3:3…) then you will always be landing on the same side of your body when exhaling.

This takes a few moments to process but tap out the 2:2 beat with your fingers and you will see that you always finish exhaling on the same ‘finger.’ If instead you run on an ‘odd’ rhythm (2:1, 1:2, 3:2, 2:3, etc.) the foot you land on when exhaling will naturally alternate and you will therefore avoid repetitively overloading just one side of the body.

So what’s it to be? Same amount of steps on inhale & exhale? More steps on the inhale or more on the exhale? And should we be making sure we are all using an ‘odd’ rhythm?

The Dangers of Assuming We Are All The Same

Although there is mounting evidence that a coordinated breathing rhythm can help runners, it is important to note that none of the research suggests one optimal breathing rhythm.

As is so often the case with advice given to runners, an assumption is made that what works for one will therefore work for all. It happens with running styles, footwear, cadence, footstrike, and more.

Yes, studies show that maintaining a breathing rhythm is beneficial for performance, but who is to say that the rhythm needs to be the same for all of us? The idea wraps up nicely in a marketing package but as far as natural variance in physiology & psychology goes, it just doesn’t hold up in practice.

Yes, some runners report that adopting an ‘odd’  rhythm has seen increases in their performance and decreases in injury, but such reports are at the end of the day anecdotal and could easily be a case of correlation rather than causation.

How many runners have tried an ‘odd’ rhythm and seen no benefit?

Dennis Bramble, who together with David Carrier originally came up with the theory of reducing exhalation stress via ‘odd’ rhythm has since stressed that it was simply a theory for which he and Carrier never found any evidence to support. He now thinks the idea “rather improbable”.

The breathing rhythm that best suits your system will come naturally (as long as you are running at a sensible pace – see on).

There is no reason it will be the same as the person you are running with, and it may well vary according to what speed you are running out, whether you are going up or down hill, or even what type of terrain you are on.

Trying to consciously maintain a chosen rhythm for the whole of your run is a recipe for disaster.

Studies show that focusing on an internal cue like breathing rate whilst running can reduce running economy (i.e. you will use more oxygen to run at a given speed).

In the 2009 study ‘The Effect Of Attentional Focus On Running Economy’ (Schückera at al.) subjects who ran while focusing on internal cues (running form and breathing) showed significantly less running economy than subjects focussing on external cues.

Focusing too much on one small part of a complex movement like running can inhibit the overall performance. If you are hoping to change or develop a habit, you need to introduce it slowly in small doses so that conscious effort can eventually become unconscious competence.

Download your FREE breathing guide for Runners inside your Insider Members area.

It’s a PDF with images and descriptions of the most effective pilates exercises to strengthen your body while relaxing your mind.

What SHOULD We Do If We Get Out Of Breath?

Being out of breath is a sign of physical stress.

Though there are health conditions such as exercise induced asthma that can cause breathlessness (which is why you should always check with your doctor if you are concerned or in any doubt as to whether running is for you) the chances are you cannot breathe properly because you are working at too high an intensity.

Modern research suggests that in humans, fatigue is a protective system initiated by the brain that sets in before physical limits of lung function or cardiac output are reached.

Unfortunately, it’s not a case of just thinking ‘Come on, I can do this” (although that can help) as this system of protection and self preservation is far more deeply ingrained and sophisticated.

The role of the brain in controlling levels of exertion was rekindled in 1997 when South African professor of exercise & sports science Tim Noakes renewed and elaborated on an idea first proposed by the 1922 Nobel Prize in Physiology or Medicine winner Archibald Hill, proposing that the brain acts as a ‘central governor’ by regulating exercise to protect body homeostasis.

Although traditionally variables such as breathing rate, blood lactate level, muscle glycogen level and body temperature are used to explain onset of fatigue, Noakes’ research showed that the variable which best relates to actual onset of fatigue is perceived exertion, i.e. how hard you feel you are having to work.

In the 2001 paper ‘The influence of sensory cues on the perception of exertion during exercise and central regulation of exercise performance’ (Hampson, St Clair Gibson, Lambert & Noakes) it is suggested that perceived effort during exercise involves the integration of multiple afferent signals from a variety of perceptual cues.

In a process referred to as teleoanticipation, it proposes that exercise performance is precisely regulated by changes in perceived exertion so that the task at hand can be completed ‘within the biomechanical and metabolic limits of the body’.

The paper highlights the extent to which perceived exertion and heart rate can be altered by hypnosis and biofeedback training provides evidence for the existence of such a regulatory system.

The implications for ‘breathing when running’ are obvious – if the central governor receives feedback to suggest that there is not a steady enough flow of oxygen to meet the demands of a run, it will take steps (e.g. output pain, movement changes, fatigue) to ensure you either reduce the intensity to a sufficient degree or, if it deems it necessary, stop running you from running altogether (the dreaded ‘bonk’ or ‘hitting the wall’).

This helps explain how despite feeling totally drained during the latter stages of a race, as soon as you see that finish line you suddenly get a boost of energy.

Your central governor ‘sees’ the race is nearly over, recalculates the threat, sees a decrease and therefore takes its foot off the break.

The same thing can happen when you finish a hard run – you feel totally destroyed for a few minutes but once the brain & nervous system has received enough feedback to reduce perceived threat, its output of fatigue and often pain are reduced.

If there’s one thing that keeps the system’s perception of threat down, it’s consistency & sustainability (ok, that’s two things).

Maintaining a consistent breathing rate during a run can be a big player in keeping the central governor relaxed and this is the likely mechanism behind rhythm breathing.

However, this consistency should not be via continuous conscious effort. It needs to come about naturally and this can only occur if you are running at a sensible pace.

Play around with different rhythms by all means but don’t fall prey to believing what works best for others will automatically work best for you.

[bctt tweet=”Getting your breath back as a new runner is scary! You will feel better after reading this from @Runners_Connect” via=”no”]