Are Your Online Sharing Habits Destroying Your Confidence?

Social networking sites have never been more popular among runners.

You can share your training with your friends, check how your segment PRs stack up against other runners in your area, and check up on what pro athletes do for training, eating, and recovery.

Whether this is a productive thing for us to be doing is another matter.

Is social media and sharing culture making you a better runner, or can it harm your self-confidence? We know Chris McDougall thinks its wonderful, but what does the science say? 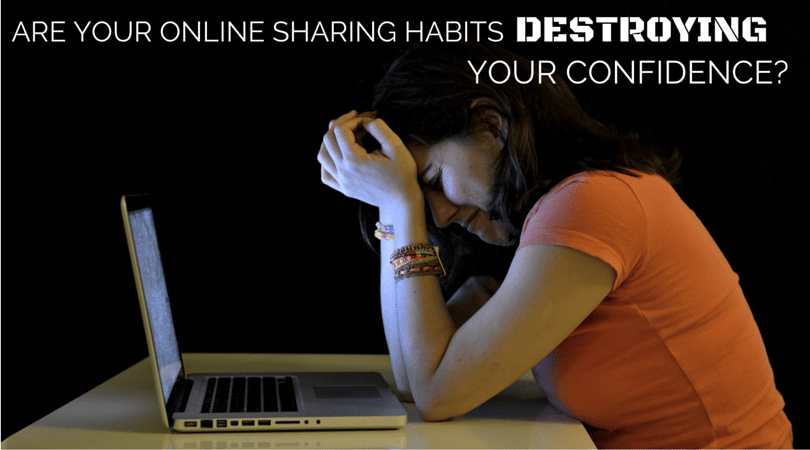 How Does Social Media Affect Happiness in Runners?

Given how many people use social media, it’s a hugely popular research topic.

Some researchers are interested in how social networks develop, why some users are passive and some are active, and how things like viral video clips spread across the internet.

Social scientists and psychologists, though, are particularly interested in how social media use intersects with your well-being offline.

To this end, there’s quite a bit of research that’s looked into how social media usage impacts self-esteem, mood, and life satisfaction, and that is what we are going to look into today.

Does sharing affect us all the same?

A research paper by Teresa Correa, Amber Hinsley, and Homero de Zúñiga at the University of Texas at Austin uncovered two important clues for figuring out how to reap the benefits and dodge the perils of social media.1

In a survey of American adults who use social networking sites, they found that two of the biggest personality traits which predict heavy social media use are extroversion and emotional instability.

Extroversion is a no-brainer—people who are outgoing probably have more drive to share their life with others.

But emotional instability is more interesting, and perhaps more informative.

Correa, Hinsley, and de Zúñiga found that lower life satisfaction and feelings like fear, anxiety, worry, and envy were closely related to how often people log in to social media sites.  This might explain why it seems like trolls are lurking everywhere on Facebook and Twitter—that type of personality is just more likely to be online!

This doesn’t mean everyone who uses social media is neurotic.

How Does Social Media Affect our Self Esteem?

A large part of why social media can hurt self-esteem and well-being has to do with what sociologists call “upward social comparisons.”

Everyone with Facebook (join our community!) or Instagram is familiar with this—you’ve probably caught yourself looking at someone else’s profile and seeing how much more fun and exciting their life is compared to yours.

They run through beautiful forest trails, meet up with all of their best friends for a group run, and figured out a super-creative way to display all of their finisher medals.

A 2014 article by Erin Vogels and others found a direct relationship between low self-esteem, upward social comparison, and frequent social media use.3

Other work by Helmut Appel, Alexander Gerlach, and Jan Crusius found that passive social media use (logging in to “Facebook stalk”) is particularly strongly correlated with envy and low levels of well-being; people who use social media to interact with their friends are less prone fall victim to upward social comparisons.4

Additionally, social networking sites don’t seem to be a great place to seek out support when your self-esteem is low.

A 2012 paper by Amanda Forest and Joanne Wood at the University of Waterloo in Canada tested whether people with low self-esteem could gain the benefits of what the researchers called “self-disclosure”—basically, talking about your thoughts and feelings.5

In real life, self-disclosure is a very good way to build friendship and get support.

Forest and Wood hypothesized that people with low self-esteem might feel safer talking about their thoughts and feelings in social media posts, so they could avoid, as they put it, the “awkwardness of face-to-face interactions.”

While people with low self-esteem are indeed more willing to engage in self-disclosure online, Forest and Wood found that negative postings on social media (e.g. “I got a stress fracture and now I can’t run Boston!”) don’t get the same kind of rewarding feedback that a positive post gets (“Just finished my first marathon!”).

Be more choosy about what you share on social media—use social media for positive things, but turn to your real-life friends for support when you’re down.

Social media can be a powerful influence over your self-esteem and self-confidence, for better or for worse.

If you get caught up in comparisons, you’ll spend a lot of time staring at a screen without coming away from it feeling any better about yourself.

Everyone else’s running logs look much more impressive than yours; all your friends look tremendously photogenic in their race-day pictures; all the other runners have way more scenic long run routes than you do—or so it can seem, if you get caught up in upward comparison.

Of course, they’re probably thinking the same thing when they view your profile! Use social media sparingly, and when you do, be an active user.

Share your positive experiences and give positive feedback to other people; positive interactions lead to better feelings of self-esteem and self-worth on both ends.

When you’re injured, overtrained, or down about a bad workout, you’re probably better off talking to a friend in real life.

Who Can I Follow on Social Media for Inspiration?

We have shared (no pun intended :P) the findings of when it is good for runners to share their findings 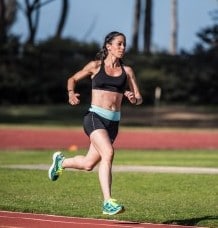 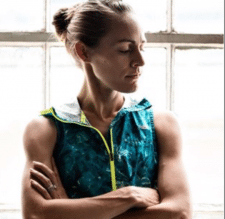 Jenny Simpson is a two time Olympian, Gold medalist in the World 1500m Championships in 2011, and aiming for another medal in the Olympics in 2016. Jenny runs for New Balance, and inspires daily through her real attitude and kindness. 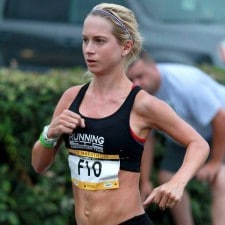 Kris is a 2:47:09 marathoner with a goal to qualify for the 2016 U.S. Olympic Marathon Trials. I’ve made a promise to myself to give it my all, accept the good and hard times, appreciate all those who support me, and enjoy every moment along the way. 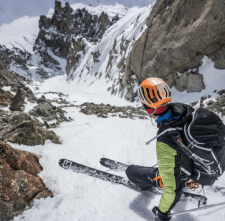 Kilian defines himself as a lover of mountains. I like competing, as it is a way to meet friends and to self-improve. But, above all, I conceive sport as a way to discover landscapes both inside and outside you. I love silence and solitude, but communication, listening, reading, writing and travelling also appeal to me. I’m (semi) nomadic, and live somewhere between Chamonix, Tromsø, and the Pyrenees. My life is spent pursuing and fighting for my dreams. 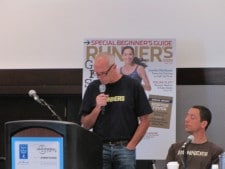 Dubbed the “Mayor of Running,” Bart Yasso is one of the best-known figures in the sport, but few people know why he started running competitively, how it changed his life, or how his brush with a crippling illness nearly ended his career a decade ago. With insight and humor, My Life on the Run chronicles the heatstroke and frostbite, heartache and triumphs he’s experienced while competing in more than 1,000 competitive races during his nearly 30 years with Runner’s World magazine. 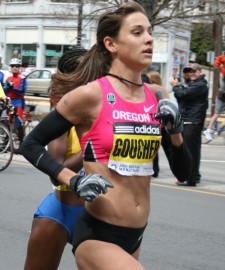 Kara is a two time Olympian, with a bronze medal in the Women’s 10,000m (2008). She’s set her sights on the marathon and holds a PR of 2:24:52. Kara is a loving mother and wife. She and her family live in Boulder, Colorado where she trains under Mark Wetmore. 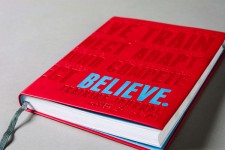 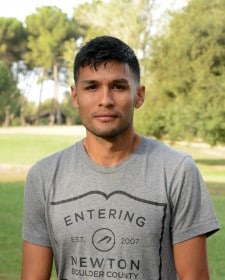 Fernando is a 2:11:36 Full/1:02:00 Half Marathoner from Fresno, California. While still in College, Fernando won his first USA Championship by breaking the American Record (1:14:21) for 25k. 3xNational Champion. Member of Newton Running Elite. 2016 Olympic Hopeful. 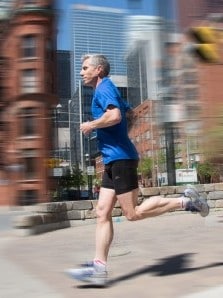 Jean-Paul is an author, advocate, and high profile endurance athlete. Jean-Paul is the 2015 “Golden Shoe Award” winner for being named “Canadian Runner of the Year”. As a Brooks sponsored athlete and veteran of over 100 marathons and ultra marathons, Jean-Paul represented Canada in the prestigious Comrades Marathon in South Africa, a grueling 90km race through mountainous terrain. 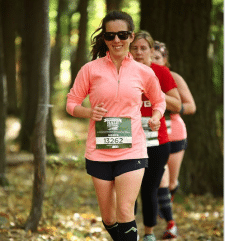 Jess is a runner with a Master’s Degree in Exercise Science and Health Promotion, is graduate of the Institute for Integrative Nutrition and is a UESCA Certified Run Coach. Jess launched Race Pace Run Club, a free virtual run club that welcomes runners of all levels from coast to coast and also meets in-person in NYC. 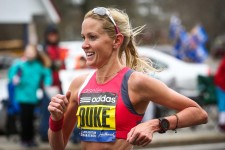 Andrea is a Mom with a Ph.D. in Sports Communication. She was a 2016 Olympic Marathon Trials Qualifier and elite runner for @oiselle. Andrew runs for Team Generation UCAN and Zensah. 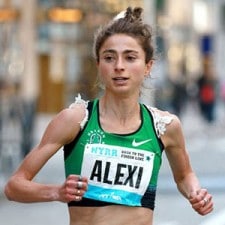 After running for Dartmouth College and the University of Oregon, Alexi is now a professional runner with the Nike Oregon Track Club Elite in Eugene with her eyes on the Olympics. Alexi was a Top 9 Nominee for the 2012 NCAA Woman of the Year Award. Alexi has simultaneously been training to make the Olympic team while writing, co-producing, and starring in her upcoming film, TRACKTOWN. 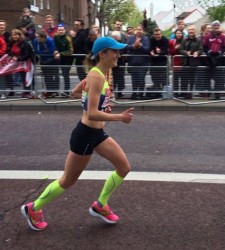 Tina is a British elite runner for the Saucony Hurricanes (also our Community Manager!). Tina shares the real ups and downs through her training blog, there is no sugarcoating in this elite runner life!

Sage ran NCAA Division I at Cornell University where he was the Ivy League Conference Champion at 10km and also qualified for the Olympic Trials Marathon at the age of 21. Upon graduation, Sage ran professionally for 2 years on the roads and became a MUT (Mountain-Ultra-Trail) Runner in 2012. Sage likes to mix it up with anything from 10km to 100 miles now in terms of race distance. 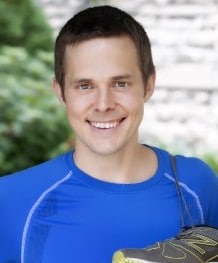 Matt Frazier is a marathoner and ultra-runner from Baltimore. His life as an endurance athlete changed when he found that he could run longer and faster on a vegetarian diet. Matt has run many marathons and has run two 50-mile ultra-marathons, and plans to one day run a 100-miler.

Through the No Meat Athlete podcast

And please do us a little favor and share this guide with a running friend who needs a pick up, for there’s a good chance that it will help them spin their perspective, to see that there is good in this world!