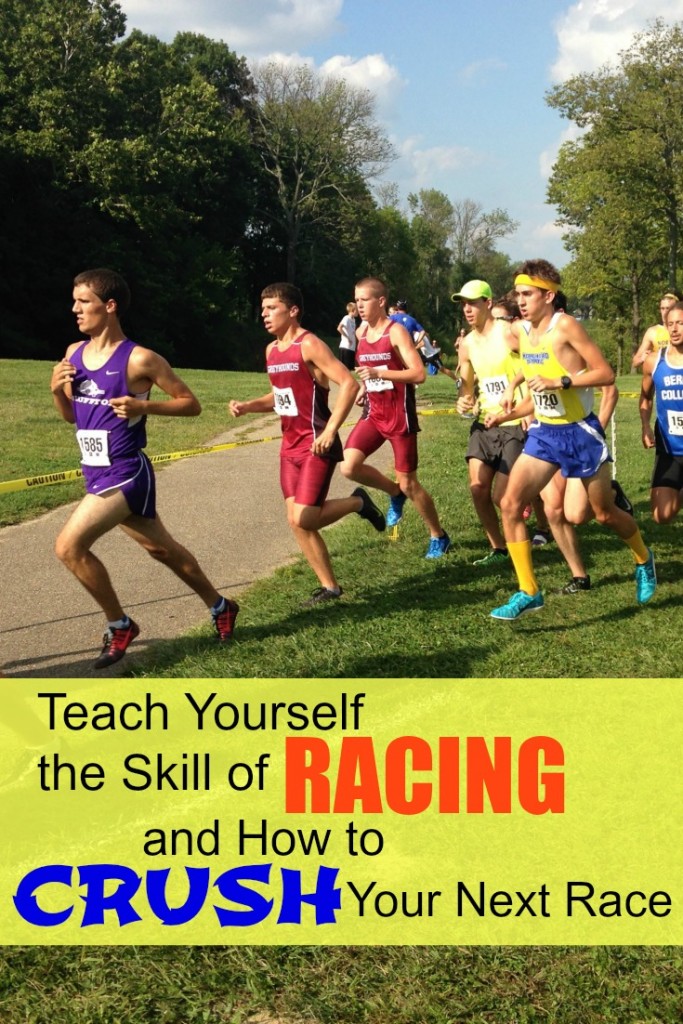 It’s easy to get so caught up in the numbers on the Garmin, the readings from a heart rate monitor, and physiological concepts like VO2max and lactate threshold that we forget what running is all about.

At it’s core, running is about you versus yourself. When the gun goes off, all that matters is your ability to execute the perfect race plan and push through when your mind and body scream stop.

What many runners don’t realize is that the ability to push during a race is actually a skill. Like all talents, some athletes are born with an greater inherent ability to challenge themselves during a race. But, just like shooting a basketball or throwing a baseball, racing is a skill that can be honed in training.

In this article, I am going to outline why the ability to push yourself during a race is an actual skill. More importantly, I am going to show you two workouts that will help hone this ability and make you a fearsome competitor the next time you toe the line.

What does it mean to teach yourself how to race

Unconsciously, the body’s number one priority is survival.

That means it fights and develops natural mechanisms to prevent situations and events that threaten our physical well-being. For example, when you put your hand on a hot stove, you’ll instinctively pull you hand back before it can be burned.

In many ways, running a race goes against all these survival instincts we’ve developed as humans.

In the final miles of a race, your legs burn as a signal to your brain they don’t have enough oxygen and your stomach turns as blood is diverted to the working muscles.

You want to keep going to reach a new PR but your body is crying stop. It’s the ultimate battle and, interestingly, it’s probably the major appeal of distance running – pushing the body beyond its limits and testing oneself.

Preparing for this battle isn’t merely about increasing your tolerance for pain. While that is certainly part of the equation, the actual solution is to train your body for the specific challenges it will face during the race and hone your skills to overcome them.

Skill 1 – Increasing your effort at the race goes on

The first challenge is to realize that as a race continues, the effort to maintain goal race pace will continue to get more difficult.

Meaning, if your goal pace for a half marathon is 7 minutes per mile, it’s going to be pretty easy to run 7 minute pace the first three miles, but very difficult to do the last three.

While many runners understand this concept, it’s not something we consciously train to overcome.

For example, traditional interval workouts are run at a consistent pace and then the recovery between those intervals allows the athlete to recover to a state that is very unlike the corresponding point in a race. To best illustrate, let’s use two charts:

This first chart is the effort level during a traditional interval workout. You run each interval and then take a specific amount of rest after each repeat. As you go, overall effort and fatigue increases slightly, but you never get to a point where your effort to complete each interval at goal pace becomes significantly harder. 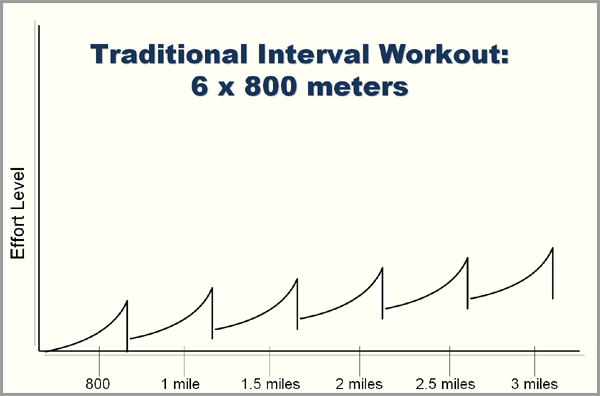 Let’s compare that traditional interval workout to what happens during a race: 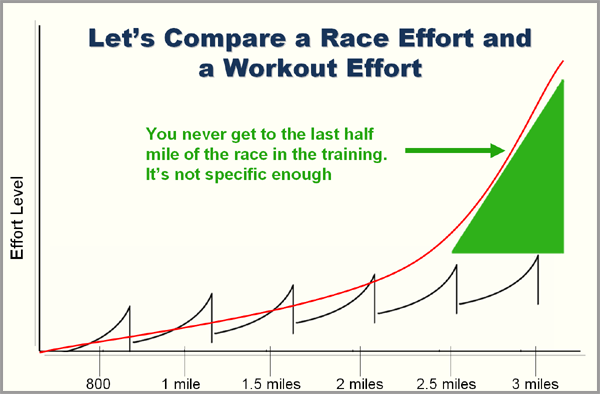 Unlike a traditional interval workout, a race will always reach a point where the effort level will need to significantly increases to maintain goal pace.

Therefore, it’s critical you teach yourself the necessary skill of increasing your effort and pushing beyond that critical juncture point during a race.

Consider one of my favorite quotes from Arnold Schwarzenegger.

No, he’s not a runner, but his ability to push himself in training and competition is legendary:

“Experiencing this pain in my muscles and aching and going on is my challenge. This area of pain divides a champion from someone who is not a champion. That’s what most people lack, having the guts to go on and just say they’ll go through the pain no matter what happens. I have no fear of fainting. I do squats until I fall over and pass out. So what? It’s not going to kill me. I wake up five minutes later and I’m OK. A lot of other athletes are afraid of this. So they don’t pass out. They don’t go on.”

While I definitely find this quote motivational, how is this a skill you can teach yourself?

If you’re an experienced runner and you’ve done your fair share of tough workouts, then you know the feeling that comes towards the middle of a track or tempo workout.You start to dread the last third, knowing it’s going to be a lot of pain. However, unless you’re having a bad day, you usually get through the session.

But, what if someone told you that you needed to run the second to last repeat as fast as you could or pick it up in the middle of a tempo when you’re struggling just to maintain your current pace?

If you’re like most runners I coach, your response would be, “I can’t. I am already running as hard as I can.”

Not only are you scared you couldn’t run any faster, but you’re worried you wouldn’t be able to finish the workout.

If that is your answer during the workout, how will you respond to that question during a race? When you hit the 1.75 mile mark of a 5k and your mind tells you it can’t go any faster, what are you going to do?

Slow down of course.

You must teach yourself in training that you can go faster. Prove to your mind that increasing the effort won’t kill you.

Unfortunately, the traditional approach to workouts will never help you hone this skill. So, how do you do it?

Workouts that teach you how to race

Luckily, with some innovative training ideas, you can teach your mind and your body these specific skills during your training runs. Here are my two favorites.

I first learned of hammer intervals from a former coach of mine, Scott Simmons. Succinctly, a hammer interval session is traditional interval workout except that on the third or second to last interval, you break from your goal pace and simply focus on running that specific repeat as fast as you can – hammering it. You take the same amount of rest before and after the hammer interval.

The interval you “hammer” dramatically increases your level of fatigue, just at the point in the workout where you’re feeling the most tired. Because the rest interval stays the same, you do not completely recover as you would in a typical interval session, and you start the next hard repeat still tired from the hammer.

This progression continues throughout the workout, providing you a much more race specific workout session and teaching your body how to push when it counts the most.

Going back to the illustrations we saw in the previous sections, compare the effort levels of a hammer session to that of a traditional interval workout and a race. 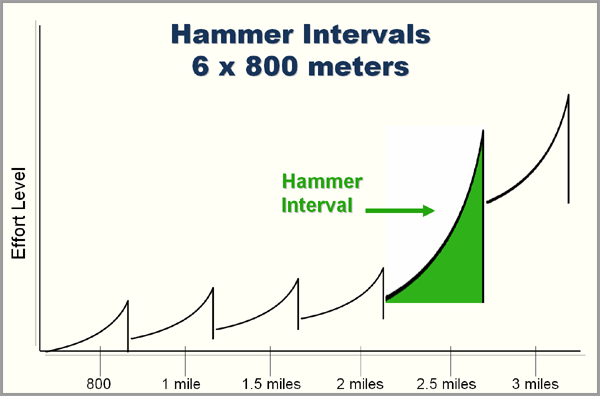 You’ll notice that a hammer interval session looks more like the effort levels you’ll experience during a race. You’re training your body to dramatically increase the effort level as the workout goes on and will be more prepared to do so during the race.

The Michigan workout is something I learned from Coach Ron Warhurst at the University of Michigan. I’ve modified it a bit to fit the terrain and facilities typically available to runners who aren’t in college.

Here is what the workout looks like for different experience levels. Be warned, even the college athletes perceive it as one of the hardest workouts they do:

Not only is this workout a great lactate clearance session, it also trains your mind to let go of its preconceptions about what it can do. You’ll inevitably hit that second or third pick up and think “I can’t go any faster”, just like you would during a race. Now is the time to teach yourself how to overcome this doubt.

Usually, you’ll end up running faster than you thought you could. Yes, it will hurt, but you’ll surprise yourself and you’ll begin chipping away at what your mind believes it can and cannot do.

Even if you’re a little off pace, you’re still teaching yourself to face that self doubt and at least try to push the pace. Now, on race day when you reach that critical juncture and it’s time to push or back off, you’ll be better prepared to fight through it.

Implement these workouts a few times in your training and see the dramatic difference they can make late in a race when your mind says it can’t go any faster or push any harder!

A version of this post originally appeared at competitor.com