The relationship between hip strength and running injuries – the latest research

Ask any fitness nut or personal trainer about “core work” and you will be treated (or not) to a long spiel about the importance.  ‘Core’ is a big buzzword these days, and it has created an industry of bosu balls, wobble boards, and ab rollers for everyone to stay up to date with the “latest” core strengthening machine. If you are not doing core work with the newest core workout, you are missing out….or so we are told!

But what’s the science say about whether core workouts are useful to distance runners?

First, we have to figure out what exactly we mean when we say “core.” Ask for a core workout from a personal trainer at a health club, and he will probably give you a series of crunches, planks, and sit-ups.

However, “core” means something very different to a physiologist or an orthopedist: it means all of the muscles of the lower trunk and pelvis: not just your abs and your back, but your hip flexors, glutes, abductors, and adductors too.

These hip muscle groups are particularly important because they’ve been involved in a range of running injuries.  Weak hips can often be the cause of IT band pain, patella tendonitis (runner’s knee), piriformis issues, sciatica, and a myriad of other common running injuries.

Therefore, we are going to look at what the latest scientific research has to say about the relationship between hip strength and running injuries, and provide you with some innovative routines to help you develop a rock-solid core. 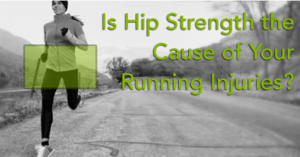 Niemuth et al., looked at hip strength in runners visiting an orthopedic clinic for injuries.  Thirty runners who had various hip and leg injuries had their hip strength tested in all six directions of motion.  Compared to a control group of recreational runners, the injured runners had weaker hip flexors and hip abductors on the injured side, while their adductors were stronger on the injured side.  The healthy runners displayed no side-to-side differences in muscular strength.  Interestingly, despite the influence of muscle strength imbalances, no relationship was found between the injured side and the runners’ dominant leg.

Another more specific study by Ireland et al. in 2003 found similar results.  Like the previous study, hip strength was evaluated fifteen women with patellofemoral joint pain (often known colloquially as “runner’s knee”), and compared with age-matched control subjects.  Again, the injured runners had weaker hip abductors as well as weaker hip external rotators on their injured leg compared to a control group.  Regrettably, this study did not measure hip strength in the healthy leg on the injured runners, nor did it examine hip flexor or adductor strength.  Nevertheless, it is an important confirmation of Niemuth et al.’s findings.

Interestingly, Niemuth and colleagues themselves published a follow-up study on the same subject—female athletes with patellofemoral joint pain—in 2007. Using a better designed procedure and taking more rigorous measurements, they did find a difference:

Injured women in the study were weaker on their injured side, as well as being weaker overall in measures of five of the six major hip muscle groups compared to healthy runners (the only one which was not was hip adduction).

Hip strength and IT band syndrome

An older study with a more innovative approach was conducted by Michael Fredericson and his coworkers at Stanford University in 2000.  In this study, the injured runners all had been diagnosed with iliotibial band (IT band) syndrome.

Like the two previous studies, Fredericson et al. found a significant difference in hip abductor strength between the 24 injured subjects and healthy controls.  However, this study went one step further: it followed the subjects through a six-week gluteus medius strengthening program.  The gluteus medius is the main hip abductor and external rotator, and is implicated in hip abduction weakness.

All but two of the injured runners were able to return to training after the six-week hip strengthening program concluded.

Of course, it’s hard to blindly follow this study for showing the importance of hip strength exercises, as there was no control group!

These studies are very promising, but they all have a similar weakness: they are retrospective, meaning they only look at runners after they get injured.  It is possible—though in my opinion, unlikely—that getting injured results in a loss of hip abduction strength.

The jury’s still out on whether improving hip strength will prevent injury, but there is good circumstantial evidence, and most orthopedic doctors would highly recommend it.

There are not too many runners out there who are willing to delay their own running injuries to be part of an experiment!

What you can do to improve hip strength

Fortunately, it’s pretty easy to strengthen your hip abductors and external rotators.  The three most common exercises prescribed are the side leg lift, the “clam” leg lift, and the back bridge, illustrated below:

Most rehab protocols call for these hip exercises to be done on a daily basis for one to three sets of 15 to 30 repeats—usually building up over time as your strength increases.

Download a video and PDF version of the 5 most effective hip exercises for runners. You’ll get more images, full descriptions on how to perform and a video to help guide you.

While there’s no evidence that traditional “core” exercises are bad for you, a routine of crunches, planks, and back extensions neglects a very important part of your core: your hip muscles.  These muscle weakness problems seem as relevant for high-level athletes as they do for recreational runners. Here are our 5 Hip Strengthening Exercises for runners.

Research has shown a strong connection between weak hip abductors & external rotators and various leg problems.  Although we are still waiting for the prospective studies that might show a preventative effect, it’s a good bet that they will be in agreement with the studies we looked at today.

Until then, do your best to make ‘leg lifts’ as ubiquitous for runners as ‘crunches’ are for fitness buffs! 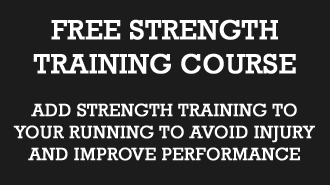 GET STRONGER NOW
No Thanks