Runners Connect » » Nose Breathing in Running: How to Breathe Properly While Running

Nose Breathing in Running: How to Breathe Properly While Running

Should I breathe through my nose or mouth?

It’s a question so basic, many runners forget to even ask.

While form, pace, stride length and other variables might all be subject to adjustment in a single run, it’s common for breathing to occur naturally, and without any second thought.

Unfortunately for those runners who don’t consider how to breathe properly when running to be something they need to pay attention to, they’re overlooking a key performance factor.

Patrick McKeown claims that you can even replicate altitude training by doing some breathing exercises that take just a few minutes a day!

Believe it or not:

Breathing is the process of taking in oxygen to fuel your activity, and there are right and wrong ways to do it.

If you’re currently breathing inefficiently during your runs, you could be holding yourself back. Even if you do not feel like it is hard to breathe when running

There are several misconceptions about breathing that have long been circulated within running circles. In this article, we’ll dispel these common myths and teach how you should be breathing to run faster. 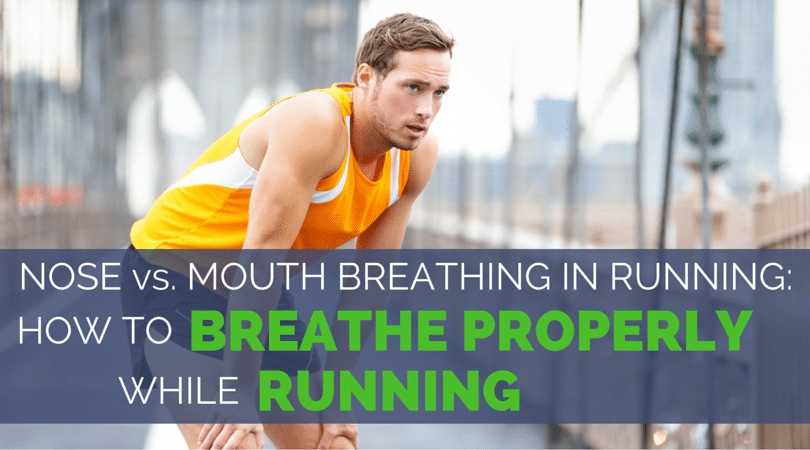 Is There a Correct Way to Breathe While Running?

Opinions on proper breathing can vary from one runner to the next.

Some say nose breathing helps regulate your breathing and warms the air before it hits your lungs.

Others insist that mouth breathing is a more natural style and increases your ability to maximize oxygen intake.

Some people may also struggle with breathing in a natural way.

If you’ve developed a sense of comfort with one way to breathe, it might be tempting to continue on in that fashion.

When it comes to running, what’s natural isn’t always what’s most efficient.

It might be a rough transition, but if you determine that your current running habits — be them breathing or otherwise — aren’t in the best efforts of your performance, you should always try to change them.

Of course, sometimes it’s knowing what’s best that is the greatest challenge of all.

Whether you feel like you can’t breathe when running or you feel fine, but know that there is a better way to breathe when you run, it is definitely time to make this change.

Download your FREE breathing guide for Runners inside your Insider Members area.

It’s a PDF with images and descriptions of the most effective pilates exercises to strengthen your body while relaxing your mind.

Nose vs. Mouth Breathing: Which is Better?

Fortunately for runners, there is a general consensus among running experts regarding how you should breath while exercising.

Mouth breathing is by far the best way to breath while running, largely because it brings in more oxygen than breathing through the nose.

Forcing air through the nostrils can tighten your jaw and other facial muscles, and tension is never good for running.

Mouth breathing, meanwhile, relaxes the jaw and can have a similar effect on the rest of the body.

That being said, breathing expert Patrick McKeown believes all runners should do some breathing exercises with your mouth completely closed to be able to breathe better when running.

Some runners do prefer to breathe through both the mouth and nose, maximizing air intake.

But whatever you do, don’t be afraid to let your mouth hang open: You’ll be a better runner for it.

If There is a Best Way to Breathe While Running, This is it

How you force air in and out of your lungs can affect how well you take in oxygen and expel carbon dioxide.

Whether you breathe through your nose or mouth does not make too much of a difference, but something that does affect your running more than you realize is the way you breathe once the oxygen goes into your body.

What is the correct way to breathe?

To make the most of your breathing, make sure you avoid the nasty habit of chest breathing in favor of what’s called diaphragmatic breathing.

Chest breathing is a weak form of breathing.

It’s too shallow to bring in maximal oxygen and doesn’t fully expel your lungs when you exhale.

Instead, your breathing should be diaphragmatic, meaning the action of inhaling and exhaling extends down into your stomach.

As you breathe, your stomach should expand and contract as your diaphragm forces air into and out of your lungs.

Your chest, meanwhile, should remain mostly still, but you’ll take in more oxygen with every breath.

Don’t worry, we explained this in further detail in our article on the best breathing rhythm to run to and we also show you how to train your lungs to become stronger, which will also help your running.

The next time you go running, be aware of your breathing and your natural inclination to breathe through your nose or mouth.

If necessary, focus on making the necessary corrections and taking in breath through your mouth.

It may be a struggle at first, but you should eventually be able to transition to a better breathing technique, and do so without thinking.

With any luck, you’ll notice an improvement in your running efficiency and performance.

18 Responses on “Nose Breathing in Running: How to Breathe Properly While Running”